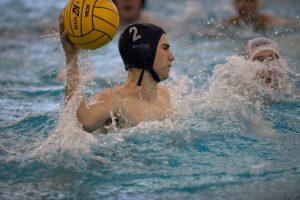 The water polo A team ended their season as state runner-up in Division 2. Goalie and junior Harris Greenbaum, pictured here, was instrumental in their success. Photo: Harris Greenbaum

As fall rolls around, many people turn their attention to the football team and its success in recent years. However, one of the most successful teams of the fall has been the Pace water polo team. Coached by P.E. teacher John Ague as well as middle school math teacher Andy Lopuszynski, the team has been gaining traction over the past few seasons, this season being the culmination of their efforts.

Although not a GSHA sponsored sport, and therefore called a “club,” the team still has enough players to field an A-team and a B-Team, including both male and female athletes. The B-team, consisting of mostly freshman and sophomores, finished with a 5-9 record, earning them a seventh-place regular season finish. In the playoffs, however, the team rose to the occasion, finishing fifth out of the 10 Division 3 teams. “Playing on the B-team was great because we got a lot of game time and we understand that we will be the future of the program, so it was great to get that game experience for next year,” said junior Alan Tapper.

Although the B-Team had a successful season, the A-team was the squad that really captured the attention of many in the Pace community. The A-team made history for Pace water polo, finishing the regular season with an 11-1 record. In addition, senior Andrew Jenkins broke the record for most goals in one career. “It was a huge honor to be able to break the record,” he said. Jenkins has made the All-Star team the past three years, was selected to first team All-State and was the Division 2 Player of the Year for the second year. Jenkins finished his final regular season at Pace with a career total of 335 goals and 47 assists.

Other big contributors included sophomore Amalie Little and junior Harris Greenbaum who played goalie, widely considered to be one of the toughest positions to play in the sport. “I think it’s harder because you have to be able to tread water and then in an instant shoot out of the water and be able to block a ball thrown extremely hard right at you,” said Greenbaum. “But I like the challenge, and it’s been a lot of fun for me.”

The team began with a scorching nine-game winning streak, going 9-1 through the first 10 games. The team’s 11-1 regular season record earned them second place in Division 2. On Sept. 30, they headed to the state tournament, beating Norcross and North Springs to compete in the state championship game against Collins Hill. The Knights lost to Collins Hill 8-13, earning the title of state runner-up in Division 2.