Tuk Tuk: A Taste of Bangkok 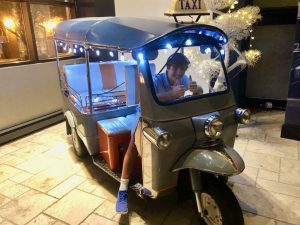 Freshman Jack Warren sits in the tuk-tuk inside the restaurant. Photo: Charlie Warren

For adventurous people looking to get a taste of some unique and exquisite cuisine, I highly recommend Tuk Tuk Thai Food Loft, as it has some of the best ethnic food I have ever eaten. Tuk Tuk’s menu, inspired by the food from the streets of Bangkok, makes it the perfect dinner location for dates, family functions or group events.

The restaurant is situated in a third-floor loft setting in Brookwood Place at 1745 Peachtree Rd., with a stunning balcony view of the Atlanta skyline. The atmosphere is fairly modern but still pays respect to its Thai roots, as Thai phrases cover some of the walls and Thai magazines line others. A slideshow projected on the back wall cycles through pictures of the bustling street life of Bangkok, including different food dishes and monuments, as well as the tuk-tuk vehicles that shuttle people throughout the streets.

The menu includes several different options including salads, small plates, curries, noodle dishes and entrees. “The best way to experience Tuk Tuk is to definitely eat family style,” said owner Dee Dee Niyomkul in an interview with Atlanta Eats. “Traditionally with Thai food, we all share our food. We have a lot of small plates on our menu that it’s great to order five or six and just share them all.” A particularly authentic Thai dish is the Mieng Kum, consisting of roasted peanuts, coconut and dried shrimp served in a spinach wrap, which came from a family recipe passed down from the owner’s grandmother, who herself was a street vendor in Bangkok.

I started with a few small plates, and later ventured into the entrees section, first tasting some crispy calamari and delicious marinated beef skewers. I then went with the Prik King for my main course, which combined a base of jasmine rice with a mixture of beef, crunchy green beans and lime, with a spicy curry sauce to top it off. I was also able to sample the Massaman curry, which combined jasmine rice, chicken, potatoes and peanuts in a lighter, less spicy dish, and the Pad Zee U, which consisted of flat rice stick noodles and sautéed pork. Each dish has its own unique flavor and accent but is still elemental enough to mix and combine to form delectable meals.

Tuk Tuk has received numerous accolades, including the Diner’s Choice Award by Open Table. It was recently named one of the top Thai restaurants in the United States by Travel + Leisure Magazine and was voted Atlanta’s best Thai restaurant by the Atlanta Journal-Constitution. The restaurant is truly deserving of such recognition and I highly recommend a visit. As a testament to how authentic and original Tuk Tuk is, owner Niyomkul said it best: “We’ve definitely brought food from 10,000 miles away a lot closer to this city.”

Categories
Food & DrinkLifestyle
Back to Top