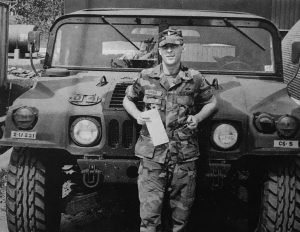 Tim Hornor, aged 23, poses in front of his HumVee in Korea. According to Mr. Hornor, he  “was the first person to ever get a flat tire in a HumVee.” Photo: Tim Hornor.

Veterans Day is a national holiday observed annually on Nov. 11 to pay tribute to people who served in the United States Armed Forces, such as Pace Upper School’s History Department Chair Tim Hornor. Unlike Memorial Day, Veterans Day honors all veterans of the armed forces – living or dead.

The American holiday originated as Armistice Day and was celebrated around the world to commemorate the end of World War I. In recognition of the first Armistice Day on Nov. 11, 1919, President Woodrow Wilson issued a message to Americans on what the holiday means. “To us in America the reflections of Armistice Day will be filled with solemn pride in the heroism of those who died in the country’s service, and with gratitude for the victory,” he wrote. The name was changed in 1954 to Veteran’s Day by President Dwight D. Eisenhower.

Mr. Hornor was involved with the U.S. Army dating back to the beginning of his college years, as he served in the Reserve Officers Training Corps (ROTC) as a student. After his sophomore year of college, he completed his basic training at Fort Jackson in South Carolina, proceeding to Airborne School at Fort Benning in Georgia after his junior year of college. There, he also completed Ranger School.

“Ranger School is an incredibly grueling experience,” said Mr. Hornor. “While I was there, I averaged roughly 41 minutes of sleep a night, ate one dehydrated meal a day, and walked around 20-30 kilometers a day for two and a half months.” Army Rangers spend their time in Ranger School pushing their minds and bodies to the limits so they can eventually lead soldiers on highly difficult missions.

After college and training, Mr. Hornor began his service at Fort Lewis in Seattle. There, he served in the 2nd Infantry Regiment, which was the only motorized infantry division of the Army at that time. “After my time there, I was selected to go over to Korea and serve in the 503rd Airborne Infantry Regiment over the DMZ, which was the most forwardly-deployed unit in the free world,” said Mr. Hornor.

The DMZ is the Demilitarized Zone that has separated North Korea and South Korea since the end of the Korean War and the signing of the Korean Armistice Agreement in 1953. Although the zone itself is demilitarized, both sides of the four-kilometer-wide strip of land are some of the most heavily armored sections of the world. “I got shot at there,” said Mr. Hornor.

After serving along the DMZ and becoming a Commander of Indirect Fire for the DMZ, Mr. Hornor was selected to become a Ranger instructor at Ranger School. To get this position, one has to have passed their own Ranger training and have received the top evaluation in all of their stationed posts. “If you look at me, I’m 5’7” on a good day,” said Mr. Hornor. “I don’t look like your typical Ranger, but I did it.”

This Veterans Day, Mr. Hornor will do what he does every year to commemorate his service and the service of veterans around the country. “I live in Decatur on the seventh floor of a building, and I hang the American flag from my balcony. I think of all the people like me – all the people who have done so much more than me – and make it a day to remember that anyone can do anything,” said Mr. Hornor.