Teachers Hit the Books, Too 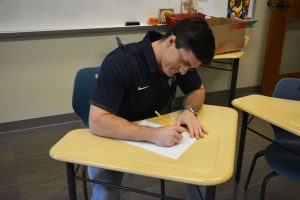 Pace students are not the only members of the community who take strenuous classes and learn more every day. Class of 2020 Dean Grady Stevens and Math Chairperson Gus Whyte both take time from their busy schedules to pursue advanced academic programs in hopes of growing as teachers.

Mr. Stevens has a master’s degree in classics and Mr. Whyte has a bachelor’s degree in psychology. However, both decided to take one step further in their educations. These two teachers are not alone, as other faculty members have also studied while working at Pace.

Head of Upper School Mike Gannon chose to go back to school ten years after graduating from Brown University, where he received his undergraduate degree in political science and economics. While working at Pace as a teacher and coach, Mr. Gannon earned his master’s degree in history from Georgia State University.

“Typically a history master’s degree takes two years, but it took me about five because I was doing it while teaching,” said Mr. Gannon. He took night and summer classes, and also spent an additional year working almost every day to write his thesis. “It was incredibly helpful for me as a teacher because when you read and write that much, you learn way more,” said Mr. Gannon. “My command of the material was much stronger after that experience.”

Similarly, Mr. Stevens has begun the process of furthering his education. As a high school student, he stuck to sports, especially lacrosse. “It was a big part of my identity,” said Mr. Stevens. “However, AP U.S. History my junior year, really made me fall in love with the Enlightenment philosophers, so I knew that was what I wanted to focus on in undergrad.” After graduating high school, he attended Johns Hopkins University, where he studied philosophy and classics.

After earning his master’s degree, he began the Ph.D. application, but soon had second thoughts. “I realized that what I did not want to do was spend the rest of my life translating Greek in a library for 12 hours a day,” said Mr. Stevens. After leaving Johns Hopkins, he found his way to Pace Academy, where he has been teaching since 2014. “After a few years here, I felt like I was still interested in going back to school and pursuing another degree,” said Mr. Stevens. That was when he found the program at Harvard University, where he is currently working on a master’s degree focusing on U.S. foreign policy.

Mr. Stevens is part of the extension school at Harvard, which is a flexible program that allows students to pursue their academic passions while still maintaining a life outside of school. Mr. Stevens spent last summer at the campus in Cambridge, Massachusetts, where he plans to return next summer. However, during the school year, he is able to take courses online at night. “It is a surreal experience being a teacher during the day, and then putting on the student hat at night,” he said. “All of a sudden your lens on viewing what the teacher is doing changes in a really valuable way.”

One of Mr. Stevens’ main focuses is bringing the skills he learns back to the history classroom. He has begun pinpointing the key skills that his students will need to have when they advance to 10th grade. “They need to learn to write clearly and in an organized fashion, and then be able to articulate their thoughts with some verbal eloquence,” he said. He is unsure what his future holds, but he does hope to be able to incorporate his knowledge of government policy into the Pace classroom.

Mr. Whyte began his early education in his hometown of Tampa. He attended Williams College in Williamstown, Massachusetts, where he was involved in athletics as well as academics. After switching his major in his junior year, he began focusing on psychology rather than math. “It was my biggest regret of college,” said Mr. Whyte. “I wasn’t mature enough to realize the value in studying math.”

Straight out of college, Mr. Whyte found a job at a boarding school in Salisbury, Connecticut, which he enjoyed. “The chance to coach, teach and live in a dorm sounded very appealing to me,” said Mr. Whyte. “However, after a few years at the boarding school, I decided it was time for a change.” He moved south to Atlanta for the warmer weather and to be reunited with family and friends, where he soon became acquainted with Pace. “Pace was the type of school I wanted to work at because academics are the first priority, but extracurriculars are important too,” he said.

After realizing that teaching was his passion, he began to look at options for graduate school and applied to a program at Vanderbilt University. He chose Vanderbilt because it had a good reputation and would allow him to study during the summer so he could continue teaching. He is currently working on a master of education with a focus on independent school leadership. Although the program takes place during the summer, there are a few projects that he needs to complete this fall and spring. He also has to travel to Nashville for a few weekends this year.

Mr. Whyte is excited to use what he learns to become a better administrator and department chair. “My first go around as a student, I was not as strong as I should have been,” said Mr. Whyte. “It’s exciting to go back and be a student now that I know what I am supposed to do.” After seeing the teacher side of things, he says he better understands what it is like to be a student. With a new focus on topics that are relevant to what he loves to do, Mr. Whyte cannot wait to see how this experience changes and benefits him as a teacher.