Students Watch, Discuss ‘America to Me’ 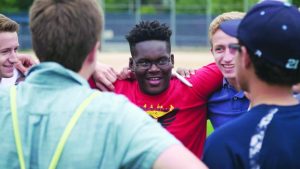 Kendale McCoy (center), a student at Oak Park High School, is featured in the 10-part documentary series “America to Me.” Photo: Starz

The Pace Academy Board of Diversity (PABD) launched a viewing open to all upper school students of the new high school documentary series, “America to Me.” Documentary director Steve James takes his audience to Oak Park and River Forest High School in Oak Park, Illinois, a suburb of Chicago, where he spent an entire year following the lives of several black and bi-racial students. The result is a 10-part series that examines the racial, socio-economic and class divides at a school where students of color make up 50 percent of the student body.

James chose Oak Park because it should have been a diversity success story. The established homeowners fought to keep the area integrated in the 1950s, and young black families moved there in hopes of an equitable, diverse school for their children. But the first episode depicts the school board reviewing ACT score disparities for their black and white students. It reveals that white students score an average of nine points higher on the test and that their average has gone up over two points in the past 15 years. The black student average, on the other hand, has not budged. More concerning was the school administrators’ lack of urgency when it came to bridging the divide.

Another striking disparity highlighted in “America to Me” is how ill-equipped the white students are to think and talk about race. The show demonstrates that beyond good intentions, white students as a group need further education when it comes to issues of race.

The show begs the question that if this diverse student body with a 94 percent graduation rate is not getting it right, then what school is?

PABD leaders and juniors Taylor Doucet and Julia Kelly led a post-watch discussion of the first episode, contrasting Pace and its student experience to that of Oak Park. The environment was inclusive, interesting and informational. Parallels were drawn from the pilot of “America to Me” to the environment at Pace. Possibly the most important realization of “America to Me” is the inadequacy of good intentions when racial issues are this deeply rooted. PABD members spoke highly of the collective student body and welcoming community. However, they also agreed there is more that must be done.

Why do racial and gender groups form? The discussion touched on common answers like shared experience and identity. A more poignant answer is that it’s easier to be with people who “just get it.”

Education is just one mission of the Pace Academy Board of Diversity. The questions posed and the depth of the topics discussed are unlike any others at Pace. PABD is always looking for more student participation, and the “America to Me” viewing series is a great opportunity for less-inclined students to get involved.