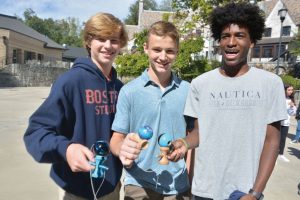 (L-R) Sophomores Gus Thomas, Eli Mautner and Logan Baker prepare for a face off with their Kendamas. Photo: Aman Hashim

Over the past few years, the Pace student body has engaged in many ephemeral fads and trends. Last year, Heelys, Rubik’s Cubes, flannels for boys during the winter and BASEketball, a combination of basketball and baseball, were popular. Many iPhone and video games also captivated the Pace community, including the well known trivia game “HQ,” the combat-filled craze “Fortnite” and the handheld NFL-based game “Madden Mobile.” Despite being less than three months into this school year, the students are already obsessed with new games.

Walking into the Inman Center, one is likely to see a sophomore boy playing with his Kendama, a wooden toy that originated in Japan. The activity involves attempting to land a ball attached to a string onto the indented platform of the wooden figure. “I love the Kendama because it really strengthens my hand eye coordination and my reflexes,” said sophomore Gus Thomas. “It gets really competitive with my friends to see who can land the ball the most times. I’m fairly decent, not going to lie.”

The students began playing with Kendamas in September when sophomore Robert Houser first brought one to school. “I immediately fell in love with the toy because I’m all for mind games,” said Houser. Some have even gone so far as to make an Instagram page, @kenrippers, that displays their skills publicly.

The junior class congregates largely in the Seaman Family Student Commons, locked in on their phones playing “Clash Royale.” The top rated iPhone game requires a strategic mindset where one places troops in their battlefields in order to overtake their opponent. The game combines elements from collectible card games, tower battles and multiplayer variations.

“Clash Royale brings excitement into my life each day as I aspire to always win,” said junior Evan Duncan.” “Clash Royale” first infiltrated the junior boys when Duncan got tired of playing “Fortnite.” He encouraged his friends to participate in tournaments within their group for some competitive pride. Since then, these boys are always sneaking in a quick game in the Commons, looking to defeat their opponents.

In the gardens, more often than not the seniors are playing hacky sack, trying to keep the ball in the air as long as they can. The seniors live for this game, and any time they get a free moment they immediately head outside to play. “I’m not really sure who started this game, but it’s so addicting,” said senior Ben Nottingham. “Personally, I am really skilled at the ‘off the knee hit’ but it’s just a fun game overall.”

Usually the seniors get in big circles ranging from 5-10 people and try to see if they can improve their score each time. As soon as the ball hits the floor, one quickly hears the shouts of dismay. However, nobody tends to blame another. Instead, they pick the ball up and get right back into it.