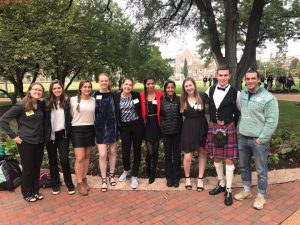 When one thinks of Model UN, cults, regicide and the first civilization are not usually what come to mind. However, from Oct. 12-14, these topics, among others, are what eight Pace upper school students discussed at the 11th annual Washington University Model UN Symposium in St. Louis, Missouri. Pace students worked on several committees, including Ad Hoc (The First Civilization); League of the Public Weal, 1465; Gotham City Council; and the Hollywood Communist Agenda under the Second Red Scare. “Pace students did a great job with participating in each of their respective committees,” said chemistry teacher Dr. Melody Walter, one of the chaperones for the St. Louis trip.

Students used knowledge from their experiences at Pace in order to effectively engage in their committees and pass directives that could quickly solve crises that  were presented. “Students needed to critically analyze their topics and learn how to independently research in preparation for their committee,” said Dr. Walter. “I was proud of how most folks were willing to participate and jump into discussions. It is challenging to speak publicly, especially about a new topic.”

English teacher Robert Kaufman, the other Pace sponsor for this year’s conference, said “it was really interesting to hear students talk about what they were passionate about, especially when it wouldn’t be relevant to discussions in Pace classrooms.”

According to Dr. Walter, some committees participated in “heated discussions” while others were calmer and spent time in order to effectively solve the issues faced in their committee. Among some of the events that took place in committee were the creation of “Ratholicism” in sophomore Elliot Mathis’ committee, the murder of two French kings and an assassination attempt on the pope in the League of the Public Weal, and the ultimate elimination of the United States’ democratic system in junior Francesca Vaneri’s committee, the Hollywood Communist Agenda.

In the end, Mathis received a verbal commendation for her work as Commissioner James Gordon in the Gotham City committee, and junior India Behl was awarded outstanding delegate for her portrayal of Arak the Shaman in the Ad Hoc committee. Behl acted as Pace’s head delegate for the conference. “The trip had many unexpected turns: from delegates plotting against the pope and planning treason to fun-filled dinners, plenty of chocolate and a pretty great time,” said Behl.