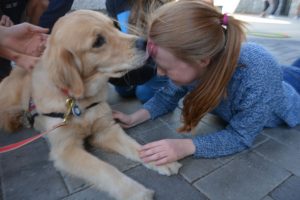 Across the country, one in every five high school students struggles with mental health problems, but many schools are unprepared to help students identify and deal with their troubles. However, the Pace Academy Student Advisory Board (SAB) is different. SAB welcomes the discussion of these tough issues in order to help those in need.

SAB’s mission statement claims that it’s “a group of students committed to nurturing the student body through education of and support for mental health issues in order to create a tolerant and thriving community.” SAB hosts monthly events to involve the whole community and focuses on specific issues including depression, anxiety and eating disorders.

Upper school counselor and AP Psychology teacher Sara Eden is SAB’s faculty advisor, a position she has held for all 11 years she’s taught at Pace. “We really want to raise awareness of the problems facing high schoolers,” said Mrs. Eden. “I believe we can this year because we have a really great energy and group.”

Mrs. Eden anticipates that this year’s success will come from the strong leadership. Seniors Blair Myers, Grace Pottorff and Kathryn Reisner serve as president, vice president and publicity manager, respectively, while junior Insha Merchant is secretary. Myers, who has been a member of the club since her freshman year, wanted to become president because she truly loves SAB. In her role, she leads meetings and helps to organize projects. “I want to put my own touch on things by making improvements and creating new events,” said Myers. She has known people who have had mental health issues, and she wants to be able to help. “Seeing the effects on people I care about makes this club very meaningful to me,” said Myers.

Along with new leadership, there have been many other changes to SAB. “We got T-shirts this year which we hope will help more people become aware of who we are and what we do,” said Mrs. Eden. One of the most significant changes, however, is the open membership to anyone who wishes to join. In the past, SAB only accepted applications from two to four students from each grade, but this year the group has a total of 34 members. “As the mental health club we are about being inclusive and promoting positivity, so why would we turn people away,” said Myers. “Also, the more hands on deck, the better.”

Freshman Giana Karamanolis chose to join SAB this year to be a part of building a balanced Pace environment. “I believe that advocating for the mental health of students is very important, particularly in such a hardworking educational atmosphere,” said Karamanolis. She is also excited to plan fun events. SAB works hard each week to plan events, but their work began even earlier than the school year. “We had a summer retreat on campus where we got to know each other and brainstorm ideas for the year,” said Mrs. Eden.

So far, SAB has organized Unplugged Day on Sep. 27, where they promoted the benefits of disconnecting from technology, and Pet Therapy Day on Oct. 17. Pet Therapy was a first-time event this year that allowed students to interact with dogs after taking a moment of gratitude. SAB worked with a pet therapy organization, Happy Tails, that works to comfort, support and heal people through animal-human bonds. “We really just wanted to brighten people’s days with this fun activity,” said Myers. Merchant believes that the event went very well. “I enjoyed it because I don’t have dogs, so being with them at school was something I really loved,” she said. “Also, I think this event helped people to begin to realize that, well, SAB is kind of cool.”

November is dedicated to raising awareness about depression. On Nov. 4, members of SAB, along with other students and Pace faculty members, participated in the Out of Darkness Walk in Piedmont Park which helped raise money for the American Foundation for Suicide Prevention. “Suicide is part of Pace’s story, as we have lost two students this way,” said Mrs. Eden. With the walk, SAB hoped to honor the lost lives and help those who struggle with depression and suicidal thoughts. “We went together as a Pace team in order to support anyone dealing with these things,” said Merchant. As the semester winds down in December, SAB will focus on relieving stress to help students in winter exams.

SAB’s main goal for this year is to educate students to help them become more comfortable talking about mental health. “We want to change the mentality of people feeling uncomfortable going to talk to the counselors,” said Myers. “I hope that it can become a more normal thing as people begin to speak up for themselves.”