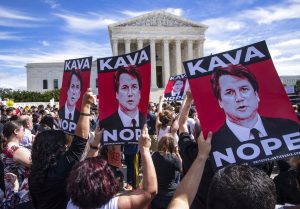 Protesters rally against Brett Kavanaugh at the Supreme Court in Washing, D.C. as the Senate debates his confirmation. Photo: J. Scott Applewhite

On Oct. 6, Brett Kavanaugh smiled as he was confirmed to the Supreme Court, while protesters’ screams of “shame, shame, shame” echoed outside. This event happened almost a month after the Washington Post published Dr. Christine Blasey Ford’s accusations that Kavanaugh sexually assaultccced her when they were teenagers.

The news of the alleged sexual assault sent the Senate confirmation hearing of Kavanaugh for the U.S. Supreme Court in a whole new direction. Wavering between shows of defiant rage and sorrow, Kavanaugh claimed the hearing had “totally and permanently” destroyed his personal life, while activists outside protested for his removal as a nominee.

Not only was the hearing a struggle of conflicting political parties, but it also concerned one of the most controversial topics in the country at the moment: society’s attitudes toward victims of alleged sexual assault. Many have seen this hearing and the election of Kavanaugh, along with the MeToo movement, as a turning point in America’s views on sexual assault, but has anything actually changed?

The answer is a mix. The fact that some senators automatically didn’t bother to listen to Ford, and accused her of lying for political gain proves we still have a long way to go. It also seems like we are repeating the past. Events like Kavanaugh’s confirmation have happened before, under the same cloud of sexual assault. Twenty-seven years earlier, Judge Clarence Thomas was accused of sexual assault by Anita Hill, with the same results as the Kavanaugh hearing. In both cases, sexual assault allegations became central to the confirmation hearings and threatened to either hinder the confirmation to Supreme Court or completely derail it. However, both Kavanaugh and Thomas were eventually confirmed.

In the present, one of the earlier events that bolstered this level of frustration and anger among protestors was the fact that President Donald Trump allegedly sexually assaulted at least 22 women. The allegations were made during his campaign, similar to allegations about Kavanaugh being made after his nomination, and even after widespread controversy as demonstrated through numerous protests, Trump was still elected president.

These events point to the same thing: guilty or not, men of power have been given leeway in cases where the topic should warrant that each case be carefully scrutinized. Just like in Kavanaugh’s hearing, many jumped to the conclusion without evidence that Ford was lying about the assault for political gain. This happened even though Ford was a reluctant witness, knowing full well that her life and that of her family would be turned upside down by agreeing to testify.

The way the issue was dealt with reflects the struggles of past sexual assault victims, who have been told that they  misremembered or were lying, and often have been laughed at after coming forward with their stories. Though all of this happened in the Kavanaugh case, this hearing and its effects are actually a mark of improvement. What marked this change? People speaking up.

So what is prompting people to speak up? The answer is the reigniting of the #MeToo movement. Social activist and community organizer Tarana Burke created the phrase “Me Too” on MySpace in 2006 to help survivors of sexual harassment and assault realize they are not alone. The phrase was popularized in October 2017 when actress Alyssa Milano used the hashtag #MeToo soon after the allegations of sexual harassment and assault against Harvey Weinstein came to light and were widely publicized. The hashtag led sexual assault survivors to share their stories to bring attention to the magnitude of the problem of sexual assault, and to give empowerment to people formerly afraid to tell their stories.

The #MeToo movement was revived during and after the Kavanaugh hearing, with thousands more people bringing attention to sexual assault on social media, increasing the number of allies of sexual assault victims, and bringing awareness to the problem of assault in workplace environments. This social activity caused the Kavanaugh hearing to stand out from other events in the past. Many victims aren’t afraid to speak up anymore, which is a sign of change for the future of how sexual assault survivors and cases are treated.

The #MeToo movement has groundbreaking potential, and we are already seeing change. In terms of gender equity, Washington state has passed a bill promoting gender-equal pay. Starbucks has announced total equity of pay of men and women. Even in the Kavanaugh case, some conservative male voices have said Ford’s claims are worthy of serious investigation, unlike in the Anita Hill hearing where her claims were almost immediately denounced. We see here both liberal and conservative sides are treating cases more seriously, instead of immediately accusing a woman (or man, in some cases) of lying.

No matter if Kavanaugh is innocent or guilty, this hearing has undoubtedly created an opening to change how sexual assault cases are looked at, with the revival of the #MeToo movement as the first step in the right direction.