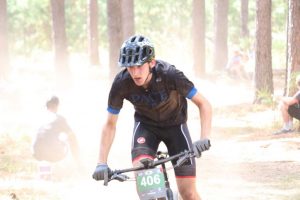 While many students from the Pace community engage in various fall extracurriculars, there is one fall sport that requires lots of grit and determination, yet tends to fall under the radar. The Pace mountain biking team has experienced tremendous growth in the years since its initial launch in 2016, bringing on new teammates each season.

As one of the upper school’s four club sports, the mountain biking program might be the most inclusive sport at Pace. The team is open to every student, girl or boy, from sixth graders in the middle school to seniors. However, even though this sport is available to a wide range of people, it is not the sport for everyone, as it requires stamina and strong calves, as well as the ability to take more than a few hard falls. The trails often include slick rocks, roots and branches, as well as steep inclines and narrow descents.

The mountain biking team operates much like the cross country team in relation to scoring. During a race, each competitor has a tracker pinned to their bike, which allows officials to keep accurate records of individual times. Races themselves vary between team rides, which accumulate and compare the scores of a particular team as a whole to other teams, and individual races, which track the times of riders and rank them on their individual success.

The races can also range in length and difficulty, depending on the location. The team travels all over North and Central Georgia, from Lake Blue Ridge to Milledgeville, to compete in these races. However, the practices twice a week can be just as competitive. “Practice is my favorite part about mountain biking because we all race each other and become closer as a team,” said freshman Jack Warren.

The team competed in five races this year, with the last race taking place in Jackson, Georgia on Nov. 3. For most practices and races, the top three finishers for the team were junior Ben Tolliday, senior Ben Solomon and sophomore Aiden Critz.

Coaches Dan Brooks and Jessie Marshburn built a strong foundation this year, attracting several freshmen and middle schoolers, paving the way for a solid, well rounded team in future seasons. This year, Solomon was the team’s highest ranking member. “It’s cool being the only senior on the team because I can be a real leader for the younger kids and show them the ropes,” said Solomon. “I’m excited to see how they turn out in a few years.”