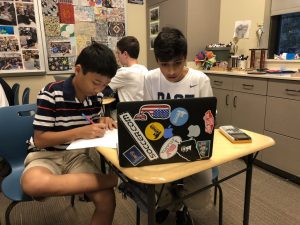 “Come for the doughnuts, stay for the math,” repeats the Pace Academy math team as they congregate for their weekly Thursday morning practice. Led by faculty advisor and upper school math teacher Jason Smith, the math team is a competitive group of numerically minded students that gather to compete in online and national math competitions. The students are not only drawn to free doughnuts, or “the breakfast version of dessert,” as Mr. Smith likes to call them, but they are also fascinated by the challenges that these math competitions present.

Along with their weekly meetings, the math team competes in 10 competitions held throughout the year on Saturday mornings. The team participates in a group ciphering section, where they collaborate on 10 problems, solving one at a time as fast as possible, and an individual test section consisting of a multitude of complex multiple choice questions. At a recent competition at Luella High School with 600 statewide competitors, Pace’s own secret weapon, sixth grader Stephen Yang, placed fifth overall in the JV division.

Students additionally participate in an online Math Madness tournament in which schools compete one-on-one with each other, using the top five individual scores on each team to advance to the next round, NCAA March Madness style. In a recent competition, the top five scorers, from first to fifth place respectively, were junior Alan Tapper, freshman Kargil Behl, junior Jackson Hamel, senior Sophie Beck and junior Austin Fuller.

Under the leadership of captains and seniors Abigail Lund and Lily Reckford, the math team has expanded and gained more popularity than ever. The captains’ passionate attitude and enthusiastic approach to guiding the team has contributed to attracting more attendees. “For this year, we wanted to emphasize not just the math but the team component as well,” said Reckford. “Through hype-up speeches and even the establishment of a team mascot, Abigail and I are turning math team into more of a community rather than common ground.”

The effect of the captains’ approach to math team has been substantial. Students are not only attending for the math, but for the team atmosphere (and free doughnuts), too. “It’s the people that encourage my return each week,” said senior Abby Ray. “Math team has become a tightly-knit group that can solve complicated problems but also laugh with each other and with Mr. Smith.”

Launched years ago under the leadership of Dr. Martha Kasilus, a former Pace math teacher, the math team has expanded as Mr. Smith stepped up to coach the team. With the problem-solving skills and mathematical minds of the team members, Mr. Smith holds very high hopes for the team. “I anticipate a victorious year ahead of us,” said Mr. Smith. “We’ve got a talented group of students who are passionate about mathematics, committed to the team and determined to succeed.”