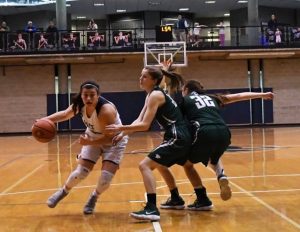 Upon starting to play basketball at five years old, senior Joelle Zelony never imagined being where she is today. Next fall, she will be swapping out her blue and white Pace varsity basketball jersey for the blue and white jersey of Tufts University.

Joelle has always loved basketball, but when beginning her search for colleges she wanted to find a school that offers both a high caliber of academics, as well as a valued basketball program. She initially aimed to play for a Division 1 school, but once she saw Tufts, she was sold.

“I chose it because I like their program better than some other D1 programs, and they contend for the national championship every year, which is pretty cool,” said Zelony. “I’ve worked so hard and it’s just so rewarding to be admitted to play at such a great university. Plus, Coach Carla Berube coaches one of the USA teams, and I know I will learn a lot from her.”

“I’ve spent seasons inside and outside of Pace basketball watching her grow into a leader and constantly trying to improve her game,” said senior co-captain Paige Fleming. “She works very well with her teammates and makes sure everyone on the team feels included and always gives 100%.” Her teammates are grateful for her constant energy and encouragement. “She’s one of the most hardworking people I’ve ever met, both on the court and off the court,” said senior Madeline Janki. “She’s the first one to get to practice and the last one to leave.”

But Zelony wasn’t always just a basketball star. “People actually may not know that I used to play soccer,” said Zelony. “I played it until middle school and I loved it, but I dropped it once I started getting serious about basketball.” Zelony is the perfect example of how shortcomings don’t define a person. In seventh grade, she was playing for the AAU travel basketball team, Peak Performance, and she was distraught after hearing she didn’t make the top team. As a result, she decided to work hard and overcome the challenge. “That’s when I stopped playing soccer,” said Zelony. She devoted herself to focusing on basketball and proving her skill and tenacity.

Little did she know, it would be that work ethic that would ultimately lead her to Tufts. “I’ve been on the top team since then and I guess that’s the reason I really love the sport,” said Zelony. “I worked so hard for it, so it’s great to see it pay off. It’s just fun for me and I never get tired of it. If I’m stressed, I always have basketball. It is also so great to be surrounded by a group of people who also love to do what I love to do.”