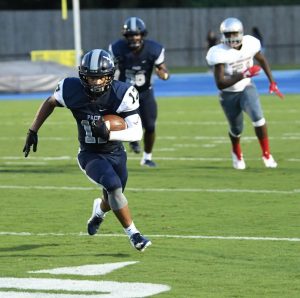 The freshmen are typically only 14 years old when they arrive on campus to start training for the season, so they are still developing as young men. “The coaches have really helped us develop, not only physically, but also understanding the game better,” said freshman Nile Bennett. The upperclassmen on the team also take on a big responsibility with all the new players coming into the program. “The freshman class has been very good at listening to what we tell them and applying it to the field,” said Assaf.

The strong senior class has been leading the team since summer, helping the underclassmen get ready for the season. “Sam Assaf was a good mentor; Ahsan [Hennings] and Cam [Hamilton] were also good mentors throughout the summer and so far through the season,” said Rocker. “They taught me not only about football, but also how to work hard every day.”

In the first six games the freshmen had a remarkable impact on the team. Freshman Lawrence “Deuce” Jordan II in particular has had a astonishing performance to start the season. Alongside senior running back Keashawn Perryman, Deuce has racked up 430 yards on the ground and five touchdowns. Deuce’s incredible speed and elusiveness makes him a tough runner to bring down. These stats put him on track to finish the season with 700 yards rushing and seven touchdowns.

“On the first day in pads [freshman] Xavier Agostino made it past [senior] Chilton Tolliver in a one on one,” said Assaf. “We were all really impressed.” Agostino is a defensive lineman with tremendous strength and quickness off the ball. Agostino has made 15 tackles this year, including three sacks. Alongside Agostino are Rocker and Bennett. They are both big and strong, and with a little more experience will make a major contributions next year. Freshman quarterback Jae Williams, although lacking much game experience, has been working hard with the quarterback coach to develop. He is expected to replace graduating senior Jared Rayman at the quarterback position next year.