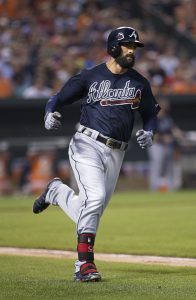 While the 2018 Major League Baseball season had a few surprises, for the most part it played out as expected. Three of the four LCS teams (Red Sox, Dodgers, Astros) were early season favorites, but one team managed to leapfrog their preseason projections: the Atlanta Braves. Coming into the year, the Braves were seen as a team that was loaded with talent. The only problem was that this talent centered around the minor league system, and they were still a few years away from competing. However, from the get-go the Braves showed their ability to go toe-to-toe with the best in the game.

The Westgate Las Vegas SuperBook gave the Braves 20-1 odds to win the National League East, a division that included the World Series hopeful Washington Nationals and the shutdown pitching staff of the New York Mets. However, neither the Nationals nor the Mets nor the Philadelphia Phillies could keep pace with this young and exciting Atlanta team.

The Braves combined veteran talent with prospect potential to snag the NL East and land a spot in the playoffs. With a career-best year from 34-year-old Nick Markakis, typical dominance from annual MVP candidate Freddie Freeman and a breakout year from rookie phenom Ronald Acuna Jr., manager Brian Snitker compiled a roster that proved the Braves would be a legitimate contender in the very near future.

The biggest question mark going into the season – the pitching staff – offered up-and-comers a chance to show their stuff as well as gain valuable game experience. Mike Foltynewicz in particular had a breakout season that saw him take control of the rotation, finishing with a 2.85 ERA, sixth-best in the National League. Prospects like Touki Toussaint and Max Fried also stood out as important assets for the future. The bullpen did struggle for the majority of the season, but midseason acquisitions and another year of growth for young pitchers will help once spring training rolls around.

This offseason will present tough decisions for the Braves’ front office, specifically General Manager Alex Anthopoulos. Snitker has already signed an extension through 2020, with a team option for 2021, but that is not the only question. Over the next few months, Anthopoulos must choose whether to surrender prospects for more veteran players that could contribute immediately, or wait for those like third baseman Austin Riley or starting pitcher Mike Soroka to continue to develop.

These decisions will convey whether the Braves want to be instant contenders for the 2019 season, or if they will show faith in their farm system, one that Snitker has been a part of since 1977. Either way, things appear to be pointing in the right direction for the Braves, who will look to build off of this year’s momentum as they move out of the rebuilding phase.