‘Bohemian Rhapsody’ the Story of a Rock Legend 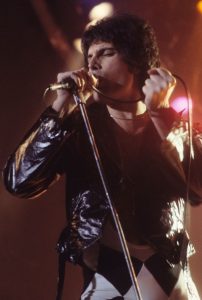 “We Will Rock You,” “Don’t Stop Me Now,” “We Are the Champions” and of course, “Bohemian Rhapsody,” are just some of the many songs made famous by the British rock band Queen. Queen is arguably the greatest rock band in history with Brian May on the keyboard, Roger Taylor on the drums, John Deacon on the guitar and the legendary lead vocals of Freddie Mercury.

The biopic “Bohemian Rhapsody” opened in theaters on Nov. 2 and tells the story of Freddie Mercury and Queen, tracking the meteoric rise of Queen and the band’s spiral downward before their triumphant reunion at the Live Aid concert at Wembley Stadium in London on July 13, 1985. Playing the role of Freddie Mercury, Rami Malek has given an Oscar-worthy performance portraying the man regarded by many as one of the greatest singers and songwriters of all time.

Freddie Mercury was born Farrokh Bulsara on Sept. 5, 1946 on the East African island of Zanzibar. He spent the majority of his childhood in India before moving to Middlesex, England when he was 18. He joined a blues band called Wreckage while studying at the Ealing College of Art, and it was during this time that a fellow student introduced him to Roger Taylor and Brian May, founding members of a band called Smile. Smile became Queen when Freddie joined Roger and Brian as the lead vocalist and, shortly thereafter, bassist John Deacon joined them. They would stay together for the next 20 years.

Within two years of the band’s formation in 1971, EMI Records and Elektra Records signed Freddie Mercury and Queen and their debut album, “Queen.” The album was hailed as one of most exciting developments in the history of rock music. “Bohemian Rhapsody” was released in 1975 and topped the charts for nine weeks. Although critical reaction was mixed, the “Bohemian Rhapsody” single became one of the best-selling singles of all time and is frequently considered one of the greatest rock songs of all time.

After their epic 1975 album entitled “A Night At the Opera,” it seemed like the band could do no wrong, with hit after well-known hit from “Bohemian Rhapsody” to “We Will Rock You” to “We Are The Champions” to “Another One Bites The Dust” to “Under Pressure” (in collaboration with David Bowie), all of which ranged in style from pop to rock opera to disco to hard rock.

Sources credit Freddy Mercury for Queen’s dramatic persona. According to Rolling Stone magazine, he was responsible for the name of the band, aware that it was open to all sorts of interpretations, including homosexuality. With his black fingernails and leather bodysuits, he was the one who convinced the other members of the band how to dress and how to make a statement on the stage. He seemed to relish dressing in flamboyant and theatrical outfits, purposely, it seems, feeding into the open question of his homosexuality.

The meteoric rise of the band’s success was a combination of unstoppable hits, record-setting album sales, and a wildly outrageous presence among Hollywood elites and the nightlife in the 1970s. Queen’s success seemed unstoppable until the mid-1980s, when the band’s popularity stalled. Their decision to perform in apartheid South Africa (in violation of worldwide divestment efforts and a United Nations cultural boycott) is cited as being one of the main reasons, but Rolling Stone Magazine reported that one of the biggest factors may have been the difficulty that fans were having in accepting Freddie Mercury’s apparent homosexuality. Regardless, the success of Queen appears to have stalled during that time and a comeback seemed unlikely.

Just as the band considered disbanding, however, Queen was invited to play at the July 1985 Live Aid concert. Although reportedly hesitant to accept the invitation, their decision to do so launched one of the greatest comebacks of all time. A review of the media coverage of the historic concert reveals that Queen’s performance stole the entire show, with many describing it as an unexpected rebirth from the moment that the band members took the stage.

Opening with Mercury sitting at a piano performing “Bohemian Rhapsody,” stories describe the audience of 72,000 singing the lyrics by memory as if Queen was the main performance — even though Paul McCartney, U2, Elton John and David Bowie (among others) had also performed at the concert. Revitalized, Queen launched a 1986 performance tour which lived up to its reputation, with some critics describing the band as the best in the world.

That tour would be Queen’s last, however. Freddie Mercury was diagnosed in 1987 with AIDS, ultimately succumbing to the disease in 1991 at the age of 45. Although he was very private about his illness (Mercury only disclosed his AIDS diagnosis the day before his death), he is nevertheless credited for raising awareness of the disease and for his reputation as a legendary performer who dared to express himself unabashedly.

With his death, the world mourned the loss of one of the greatest and most iconic musicians of all time. With the release of “Bohemian Rhapsody,” viewers get a glimpse into why Freddie Mercury and his rock band, Queen, are so legendary.