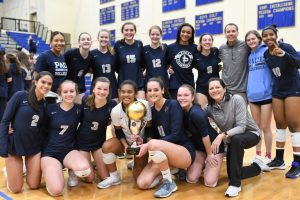 Pace varsity volleyball defeats Westminster for the second year in a row for the GHSA AAA state title on Nov. 3.

It would have been completely understandable for the varsity volleyball team to sleep in the trophy room after last year’s AAA state championship win – the team’s first ever for Pace. Instead, the team broke barriers with a back-to-back state title on Nov. 3 at McEachern High School, defeating Westminster for the second year in a row.

Tensions were high and the gym was rocking as fans from both teams made their presence known. The Knights overpowered Westminster in four sets, losing the first 16-25, and taking the rest 25-20, 25-22 and 25-21. “The only thing that makes a state championship win better is two state championship wins in a row,” said junior Ada Jane Agolli, who contributed heavily to the team’s success.

The journey to the state championship was filled with adversity, and varsity head coach Anna Bush guided her team headfirst. The momentum for the state playoffs came directly from the area tournament matches.

On Oct. 17 Pace faced a fierce match against Lovett at home. The match consisted of close points and tough plays. Lovett pulled away with the first set at 25-19, but Pace turned the next set around with a major comeback of five straight points to win 25-21. Pace won the match 2-1. Even the blackout caused by Hurricane Michael could not stop this victory.

A huge impact in the match was previously injured player and junior Lucy Ferry. “Coming back from my ankle sprain was really frustrating,” said Ferry. “It took six weeks for me to start practicing again, but even then I couldn’t do everything. My teammates and coaches were really supportive during my recovery. My first kill in the match against Lovett got my teammates really excited and I am, of course, happy to be back on the court.”

On Oct. 18, the Knights traveled to Westminster to take on the Wildcats for the Area Championship. This huge rivalry turned this important game into an epic battle, especially since the Pace team had previously lost against the Wildcats during the regular season and defeated them in the state championship last season.

Pace immediately responded to Westminster’s attacks and shut down their defense. The team barely breezed by the Wildcats with 25-23 and 25-19 wins in the first two sets. Emotions were high and Pace was unable to sustain their level of play, with Westminster sailing to a simple 25-12 victory in the third set. But the Knights began to stop trading points and won the fourth set 25-10. “Winning area this year felt amazing, especially because we had so much fun on the court and played as a team,” said junior player Dominique Turner. “Beating your rival on their home court always feels good.”

The first and second round of the State playoffs on Oct. 20 in Inman against Appling County and Islands High Schools were effortless for the Lady Knights. Pace defeated both schools in straight sets, 3-0. Next up was the quarterfinals on Oct. 27 against North Hall. That day home court advantage paid off when nothing short of perfection was reached with a straight-set win of 3-0.

Pace moved on to play Lovett in the Final Four at home on Oct. 30. The varsity volleyball team had played Lovett twice this year and won, but only the winner of this match would make it to state. Pace was determined to make it to finals with another straight-set win of 3-0 and succeeded in doing so. “It just feels so nice,” said junior Sasha Ratliff. “I really felt the team supporting each other and it made me happy to be a part of this great match against Lovett even though I could not play. They went out and killed it.”

The moment of truth was captured when the players stared across the net at the Westminster team at the state championship. Coach Bush best depicted the match and season goals: “We matured a lot this season,” said Bush. “We had a lot of adversity this year as far as injuries, sickness and even players bursting into tears at practice. There was a lot of tension during state the championship match, but especially after our first set loss at 25-16. The team’s fortitude and calmness – how they knew they could play better – was really amazing to see. I hope everyone looks at our state championship journey and doesn’t fast forward. It’s not just about this one game. Win or lose we got so much out of this season.”

Senior Davis Mathis returned this year after a major back injury and surgery last year. She worked on and off the court to be able to play this season and no longer watch on the sideline and she got to play in the state championship match. “It was icing on the cake to see the team win and watch my daughter back on the court,” said Davis’ mom Jenny Mathis.

This has been an outstanding season for varsity volleyball. Next year, new faces like Ratliff, who was ineligible to play this year, will shine on the court. However, the team reflects as six seniors have ended their final season. “I can’t believe we won,” said senior Alexandra Baker, who provided tremendous leadership this year. “This is the best way  to end my senior year career at Pace.” The other seniors – Sophie Beck, Paige Fleming, Mathis, Nicole Petrosky and Lily Reckford – are also glad that their last game was with this championship team.