‘Beauty and the Beast’ Wows the Audience 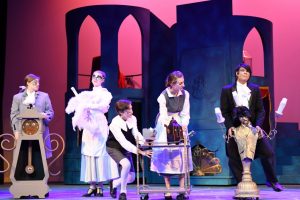 Students watched the trailer for the much-awaited Pace fall musical “Beauty and the Beast” in morning assembly the day before the show opened on Oct. 25. The trailer showed behind-the-scenes footage of the actors working hard to perfect their singing, dancing and acting. The trailer not only captured the actors’ excitement for the upcoming show, it also created suspense with the two leads, junior Andrew Miller and senior Grace Pottorff as Beast and Belle, respectively, rehearsing an emotional scene.

The show the next evening opened with the curtains down and projector screen set up. An audio recording welcomed the audience to the show and proceeded to tell the backstory of “Beauty and the Beast.” The video was a terrific introduction, with Pace Director of Libraries Matt Ball narrating the story as pictures drawn by lower schoolers illustrated what Mr. Ball is saying.

The show began with Belle and the village ensemble singing the classic song “Belle,” led by the supremely talented Pottorff as the ensemble sang and danced in the background. Then senior Jeremy Leven stumbled onto the scene with his large, cumbersome invention. He did an excellent job playing Belle’s father Maurice, the scatterbrained old man and inventor. His excellent voice was on display in his duet with Belle, “No Matter What.” He also showed his ability to portray emotion when he was in the woods, and as he arrives at the castle.

Junior Austin Fuller and sophomore Jack Carson showed off their acting skills as they made their way onto the stage as Gaston, played by Fuller, tried to impress Belle. Carson as Gaston’s goofy sidekick LeFou made the audience laugh out loud many times. Fuller had a beautiful, baritone voice well suited for his songs. The pair’s comic interactions made these two an entertaining duo on the stage. Later on in the play, they are joined by D’Arque, played by sophomore Jack Brown, who successfully pulls off the dark mystical tone of the song “Maison De Lunes.”

As the show moved from the village to the Beast’s castle, the audience saw new characters. Senior Emily Schmitt, playing the clock, Cogsworth, and junior Matthew Quintana playing the candelabra, Lumiere, greeted Maurice at the castle. Quintana did an exquisite job portraying this character, using an authentic French accent. He and Schmitt were very funny as they interacted with their characters’ contrasting personalities.

Sophomore Audrey Holton did a terrific job playing Mrs. Potts, utilizing an English accent identical to the original Mrs. Potts. Freshman Cole Kaplan as Chip, the teacup, was skillful in playing the role of the younger character with his cheerful voice and constant smile. Holton showed off her beautiful voice in her first song with Belle, “Is This Home?”

Seniors Abby Ray and Raina Williams capped off this group playing Babette, the feather duster, and Madame de la Grande Bouche, the Wardrobe, respectively. Ray is an excellent dancer, and demonstrated strong acting skills as did Williams. All of these characters formed an excellent ensemble who brought the whole show together with their humor; they all came together for the popular “Be Our Guest” song.

After a rocky start, junior Andrew Miller brought it back for an excellent performance. In his first scene his mic cut out so the audience could not always hear his lines, but after that, it was smooth sailing for Miller. The Beast is not an easy part to play, for he has many complex emotions. But Miller successfully portrayed the Beast’s longing for Belle while also showing that his outer shell was not ready to express these emotions. He effectively showed the Beast’s character arc through the story, developing the way the Beast felt about Belle with the song “If I Can’t Love Her” closing the first act. Throughout the show his acting was strong, ending with the final kiss.

FAC Technical Director Scott Sargent, along with FAC Assistant Technical Director Rachel Hunter and their students, put together a brilliant set for the musical. Many people who saw the show said that the set was way beyond high-school level. From the beautiful village at the start of the show, to the castle that rotated 360 degrees, the set was amazing.

There were many special effects that enhanced the audience’s experience even more. Fog machines were used to create a spooky effect as the cast moved through the woods. Maurice’s invention was very detailed and even ran to make it look like the machine was chopping wood, and when it stopped working, a spark flew out of the top of it.

The scenes in the dining room were complemented by a beautiful stained glass window that appeared to be glowing. The “Be Our Guest” number included two spinning wheels of plates, a cupboard with moving objects and and dangling line of cutlery. In the final scene, the wind that made the rose petals start swirling around in the glass case, and the cable that allowed Miller to rise into the air and spin around truly enhanced the audience experience.

Director Sean Paul Bryan hired an orchestra to play the strings and percussion parts of the songs, which upped the professionalism and enjoyment of the show. The costumes were also fantastic. Notably, the staff of the castle all had very creative and fun costumes. Williams’ wardrobe was comical and impressive in its ingenuity. The Beast’s head was over the top; it was magnificent how real it looked.

The fall musical was a total success, selling out almost every show. The combination of great acting, singing and dancing made for a fantastic experience. Many teachers have said it was the best show they had seen in their time at Pace. With the spring musical “Disaster!” coming this April, “Beauty and the Beast” has set the bar high for the  productions to come.