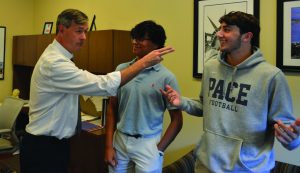 “Aman, shave that beard!” “Aman, you are getting a demerit for that facial hair!” Too many times I have been called out for the stubble on my face, and it’s time this antiquated rule comes to an end.

Pace Academy should reexamine the student handbook rule established decades ago that do not allow beards yet do allow mustaches. The guidelines in the handbook were made to preserve the safety and discipline of students. However, as society progresses, rules should progress as well. Pace is restricting the chance for students to show maturity, growth, self-expression and cultural identity.

Teachers argue that beards present an unprofessional and non credible look. But some of the most famous men in history had beards. Abraham Lincoln, Sigmund Freud and Charles Darwin all had beards. However, they were not singled out for that feature but instead were known for their breakthrough discoveries and impacts at large. Even multiple admired Pace teachers have beards.  Professionalism and beards are not mutually exclusive.

Another Pace faculty member informed me that we who have this middle phase of “scruff” look like “complete [garbage]” and we appear to be too lazy to shave. But many teenage boys who have the ability to grow a beard embrace that characteristic and believe that it enhances their outward appearance and confidence in a positive way. If I think that stubble looks better on me than being clean shaven, then I should be allowed to express that choice.

Many cultures have distinct features that pertain to their identities such as different hairstyles or clothing. In my culture as a Muslim, teenage boys having a slight amount of facial hair or even a full beard is very common. I am beyond proud to be a Pace student but at the same time, I embrace my culture.

There are many cases where not shaving has a bigger meaning, such as No-Shave November. This month-long movement urges people to appreciate their hair in honor of cancer patients who lose theirs to treatment. We are encouraged to forego shaving and donate money to aid the fight to end cancer.

I do not believe that anyone should be able to rebel and do what they want. But since females at Pace are allowed to put strands of blue and purple in their hair, someone can spray paint their entire head blue, and boys can wear earrings, then males should be allowed to have beards. Students with beards do not negatively affect anybody or detract from the professionalism of our school.