Ada Jane Agolli Sets Herself Up for Ivy League Volleyball 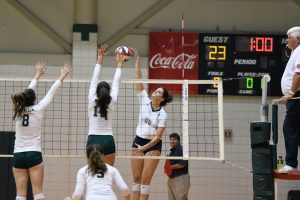 Junior Ada Jane Agolli is the 6-foot-3 product of two European professional volleyball players, Artan and Ogerta Agolli. Her parents have been both role models and her biggest supporters through her volleyball career. After four years of playing competitively at her club and three years at Pace, she has decided to pursue playing volleyball with Brown University’s team post graduation.

Agolli’s height initially led her to play basketball with the hopes of playing at a high level in the future. However, her parents’ passion for volleyball eventually resonated with her and became her passion as well. “My parents took me to a Georgia Tech volleyball game when I was younger, while I was still playing basketball, and the environment of the whole gym was electric,” said Agolli. “I instantly knew I wanted to be a part of something that special and invigorating.”

At the age of 13, the first step in her path to Division I volleyball at Brown was trying out for club volleyball, leading her to A5 Volleyball Club where she plays on team 16-1 in Alpharetta. “My favorite part of club volleyball is the super high intensity,” said Agolli. “A lot is expected out of my team since we are one of the top teams in the country, so I’m always being pushed past my comfort zone. I know that I am becoming a better athlete every time I step into the gym. I am also able to connect with my teammates in a way that’s different from my friends at Pace because we go through so much, physically and emotionally, together.”

Although Agolli has attained an impressive result from her years of playing by committing to the application process at Brown, her journey was far from effortless. This past year, she had to switch positions on her club team for the season. “It was very different and frustrating at times playing a completely new position I had never played before,” said Agolli. “I wanted to be good at it right away, but it took time. I went to tons of extra practices and stayed for extra reps after my regular practices to really get consistent and powerful in the position.”

With a block jump of 111.0″, an approach jump of 120.0″, a vertical approach/reach of 23.0″, and a broad jump of 92.0″, the outside hitter has had a major impact on the Pace volleyball court since her start in ninth grade. “She is hilarious, friendly, and a joy to be around on and off the court,” said senior Nicole Petrosky. “I’ve loved watching her improve and am so proud of her committing to Brown.” Agolli has loved watching the Pace volleyball program grow every year. They are now beating teams Pace has never beaten before. Her favorite memory was winning the state playoffs final four game against The Lovett School her freshman year.

Agolli had been talking to Brown representatives for a few months prior to her commitment. They watched her at tournaments and she had been communicating with them through emails and over the phone. She always wanted to go to a school that prioritized academics along with athletics, with most of her communication being with Ivy League schools.

After visiting in early September, she knew that Brown was the perfect school for her. “I clicked with the team instantly and just had a feeling that was like, ‘this is it,'” said Agolli. “I’m looking forward to starting a new chapter of my life in college and I can’t wait to just play at an even higher level. It’s been my dream since middle school to play volleyball at the collegiate level, so it’s very rewarding and humbling to be here now.”

Categories
SlideshowSports
Back to Top