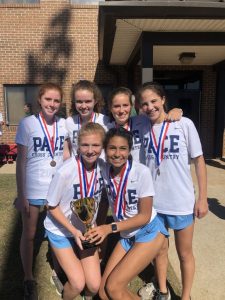 This past Saturday, Nov. 4, was the state cross country meet in Carrollton. Competition in 3A was hot in both the girls and boys races. Our region had three boys and three girls teams on the awards podium.

Our boys started the day for us on the course. Junior George Adams led the way for the Knights as he had an individual 10th place finish on the podium. Every boy ran faster on this course on Saturday than they did at the meet on the same course earlier in the season.

Freshman Edward Blaha had an outstanding 13th place finish. Junior Sam Adams, who had been running as our No. 5 most of the season, stepped up and ran No. 3 for us, having a great race.

Freshman George Blaha finished three places behind Sam with junior Quill Healy rounding out our scoring five, with freshmen Robert Mallis finishing sixth and Robert Houser seventh.  At the end of the race, when the points were tallied, this young squad, who has run like seasoned veterans all season, had put together a fourth place finish for the awards podium.

The girls stepped up to the line next. Junior Paula Sandoval established her positioning very quickly in the race. When all was said and done, she was on the individual podium with a sixth place finish. Paula was joined on the podium by freshman Laura Arenth who steadily moved up during the race like a veteran cross country runner, placing eighth overall.

Sophomore Laura Romig had the finish of the day, sprinting down the last hill to hold off a Lovett runner. Laura missed the individual podium by a mere four places. Our fourth runner was junior Payton Payne while sophomore Kat Hood took our fifth place.

Our top five girls were in the top 23 of the race. Freshmen Jordan White and Margo Kaye had outstanding races, finishing as our sixth and seventh runners. When the dust settled and the points were added, the girls secured a third place podium finish.

We would like to thank the entire Cross Country team and their families for all of the hard work and support throughout the season. Parents, we thank you for all the snacks and drinks that it takes to feed this team of 61 runners. The early mornings of dropping them at school to ride the bus to the meets are rough, but you always go get your coffee and continue on up the road to see the races.

Athletes, we thank you for the constant hard work and tremendous work ethic that you show daily. It certainly paid off for each of you as we progressed through the season. Thanks again, and congrats on a wonderful season.