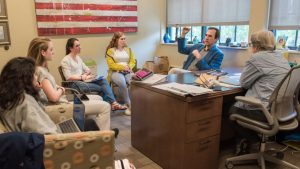 As the directors of Pace’s Isdell Center for Global Leadership (ICGL) introduce another year of study tours, they also reveal the theme. This year’s theme is energy, and to help introduce the importance of sustainable energy to the students, ICGL Director Trish Anderson invited author and journalist Jeff Goodell to address the Pace community at a series of events held Sept. 23-16 at the school.

“I brought him in because we required the ICGL scholars to read his book ‘Big Coal,’ and I read his other book ‘When the Water Comes,’ and they both were fascinating,” said Ms. Anderson. “Additionally, he has been a leader in the journalism community as an advocate for climate change, so it was an easy decision to bring him in.”

Mr. Goodell was born in 1959 and grew up in Silicon Valley at the dawn of the digital age. When he was young he dreamed of being a writer, and attended Columbia University for graduate school in fiction writing. After college, he had an opportunity to work at a weekly newspaper in Manhattan and he took it without hesitation. “I really loved it,” he said. “I realized that some of my weaknesses as a novelist were good for journalists, and I wasn’t afraid to ask people questions, so it really worked out.” He said that this curiosity about the world, combined with his frustration that companies like Apple were taking over his hometown, is what fueled his interest in climate change.

“I love technology and I think it’s very important for our world, but I never thought about where the energy came from,” he said. “So when the New York Times asked me to write an article about coal I was shocked at the amount of coal [mined in a single quarry in the Appalachian Mountains], but also how reliant all these [technology] companies are on burning these rocks. However, I  also realized how ignorant I was about the world around me, and I knew I wasn’t the only one to not understand this, so I took it upon myself to share this story.”

He by no means calls himself an activist, but he does want people to hear his talks on climate change and be inspired to take action to address it. “For me, telling these stories that have this social impact and create this change is very important,” said Mr. Goodell.

In order to spread the word about climate change, Mr. Goodell has written countless articles in addition to his two books, and currently is writing for the Rolling Stone magazine. For one article, he even traveled to Alaska and got time alone with former President Barack Obama. He says most of his articles as well as both of the books are designed to spread awareness about climate change. “There are some people who think climate change isn’t real, and I can’t change their opinion,” said Mr. Goodell. “But I can assure you that it is real and if we as humans don’t do something about it soon, the consequences will be dire.”