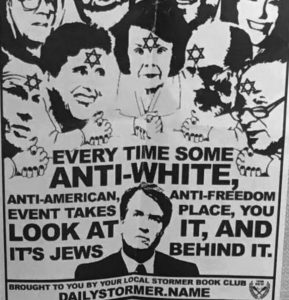 Although the words were very hateful, Police Capt. Kevin Farber in Poughkeepsie was not able to arrest the man suspected of hanging the fliers in New York because “the wording of the fliers did not rise to the level of a hate crime.” Photo: Jewish Telegraphic Agency’s Twitter account

On the mornings of Oct. 7-8, anti-Semitic fliers blaming Jews for the sexual assault allegations against Supreme Court Justice Brett Kavanaugh were found on the campuses of four American colleges. The fliers loudly project this hateful message: “Every time some anti-white, anti-American, anti-freedom event takes place, you look at it, and it’s the Jews behind it.”

The fliers were found on the University of California campuses at both Berkeley and Davis, as well as at Vassar and Marist colleges in Dutchess County, New York. The fliers depict Kavanaugh surrounded by Jewish members of the United States Senate, marked with Stars of David on their foreheads. At the bottom of the fliers, “Your Local Stormer Book Club” took responsibility.

According to the Anti-Defamation League (ADL), an organization dedicated to fighting anti-Semitism, the “Daily Stormer Book Clubs are small crews of young, white men who follow and support Andrew Anglin and his neo-Nazi website, the Daily Stormer.” The website is updated daily with anti-Semitic articles, all of which bear offensive titles such as: “The Jews are Filthy.”

An example of such campuses is the University of Michigan at Ann Arbor, where a professor forced students to listen to an art lecture on Oct. 4 that equated Israel’s Prime Minister Benjamin Netanyahu with Adolf Hitler.

Other common anti-Semitic occurrences on college campuses involve the displaying of the Swastika, like at Duke University in Durham on Oct. 10 where Swastikas were carved into the doors of bathroom stalls.

To combat and prevent any anti-Semitism within the Pace community, the Pace administration and faculty are forceful in discipline and education. The Pace Handbook enforces the Code of Conduct and Respect, where students must refrain from discrimination based on “race, religion, ethnicity, gender, sexual orientation, physical handicap, and the like.”

On Oct. 17, 77-year-old Holocaust survivor Herschel Greenblat shared his story with Pace Upper School students to educate the community on the horrors that the Jewish people have overcome and encourage better acceptance of and advocacy for people of the Jewish faith. “Do not be a bystander,” Greenblat instructed. “Be a friend.”

Pace Academy students can expect more education and activism against anti-Semitism in the future, as Upper School Director of Diversity and Inclusion Joanne Brown believes education is the best way to combat hateful ignorance.