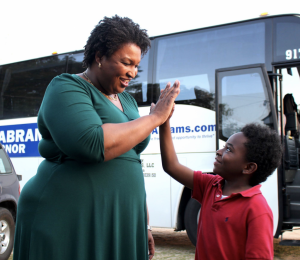 As Republican Brian Kemp and Democrat Stacey Abrams head toward a Nov. 6 battle for governor of Georgia, Georgia is experiencing the giant gulf between the two political parties (both in style and substance) that is also playing out in national politics. There is no question that the candidates are on completely opposite ends of Georgia’s biggest political divides on immigration, gun control, religious liberty and health care.

Brian Kemp, the Republican, won his party’s nomination with the help of a controversial TV ad where he stated that he, like President Trump, is not a moderate guy. The ad portrayed Mr. Kemp with a gun and showed him as a “politically incorrect conservative” who would personally “round up criminal illegals” in his pickup truck. That brash style won him Trump’s endorsement.

On the other end of the political spectrum is Abrams, who, if elected, would be the first African-American woman elected governor in U.S. history. Soon after announcing her candidacy, she called for the removal of the giant Confederate-themed carving on Stone Mountain, angering many in the state where white voters see such monuments as tributes to their Confederate heritage. Abrams has also advanced progressive policy ideas including investment in public education, common sense gun control and the expansion of Medicaid. (Kemp opposes the expansion of Medicaid.)

Now, with less than a month before the election, a Landmark Communications Oct. 1 poll has Kemp slightly ahead by two percentage points with a 3.2% margin of error. (An Atlanta Journal Constitution poll released on Sep. 1 showed Democrat Stacey Abrams and Republican Brian Kemp deadlocked at 45 percent.) Trump, who won this state by five percentage points in 2016, was certainly instrumental in securing Kemp’s Republican runoff victory. However, both of these recent polls suggest that President Trump’s popularity in Georgia may be waning and that Georgia voters are torn down the middle.

On one hand, can a state in the Deep South which has been led by white, male governors since 1776 and which only removed its Confederate insignia on its flag in the early 2000s elect a progressive black woman as its governor? Or will an increasingly young, more diverse and progressive population of Georgia today elect a shotgun-toting, bold Republican who has no problem speaking his mind, even if it’s offensive and politically incorrect? The Pace Academy community itself seems to be divided on the topic.

As a writer who moved from New York City only two years ago and who, like many New Yorkers, is still scratching his head over the fact that our country could elect Donald Trump, I will be canvassing in support of Stacey Abrams. My support of Abrams is motivated by two important issues.

First, I have become increasingly concerned about the mass shootings in our schools and elsewhere and I fail to understand how anyone could be content with the status quo as it relates to gun control, particularly with military grade weapons. Abrams has advanced a plan for common sense gun control that aims to keep guns out of the wrong hands and approach the issue legislatively to fix our broken laws.

Kemp, on the other hand, launched his campaign with a Four Point Plan which included a defense of our Second Amendment and has repeatedly focused on “protecting our Georgia values,” prioritizing preserving the status quo rather than the lives being lost.

Second, Abrams has led the fight to protect reproductive health care access in Georgia while Kemp supports a “Heartbeat Bill” that outlaws abortions after six weeks. With the appointment of Brett Kavanaugh (who Kemp endorsed) to the Supreme Court, the 1973 Roe v. Wade Supreme Court decision, upholding the right to an abortion in our country, is now severely in jeopardy, and we need to be prepared for the fact that abortion could soon be illegal in many U.S. states. I want to live in a state that supports a woman’s right to choose. A victory for Kemp threatens women’s rights and their access to reproductive healthcare.

Although I am too young to vote, I hope to encourage people to take part in this important moment in American history and start voting for political leaders, like Abrams, who will make intelligent and thoughtful decisions that affect our daily lives.