Your Vote Matters. Be Sure to Register by Oct. 9. 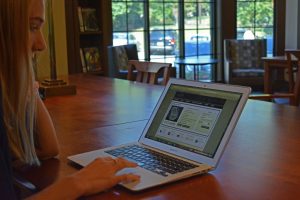 As midterm elections approach, Americans everywhere make a decision, not only on whom to cast their vote, but whether to vote at all. The right to vote is generally regarded as one of the cornerstones of American democracy, yet voting rates are progressively lower each year. It seems every American is wondering if, in a country of over 30 million people, one person’s voice makes a difference.

In short, the answer is yes. Voting is one of the most important rights given to Americans, generally because it gives all eligible voters a voice in their own government. It seems obvious to want to participate in one’s own government, but according to the U.S. Census, only 61.4% of people out of 240 million voting-aged Americans voted in the 2016 presidential election. Compared to other democratic-styled countries like Belgium, whose percentage of voters was 89%, the United States has an almost embarrassingly low voter turnout, ranking 31st out of 35 in developed countries. It’s time this changed.

A full 25% of the people who didn’t vote in 2016 said they didn’t like the candidates or campaign issues, and 15% didn’t vote because they believed their vote wouldn’t make a difference. These beliefs are false, as voting is a communal effort, where even a single vote can make a difference.

If 10% of the 150 million people who didn’t vote actually voted in the presidential election, this would mean almost 15 million new votes in the system, which could have affected the results dramatically. For example, in a 1994 wave election, Republicans won with only four million more votes, taking eight Senate seats and 54 House seats.

In Virginia during the Virginia House of Delegates Race, there was an instance where one person’s vote in the 94th district could have decided the election results. Though this would have resulted in a wave election, a few votes still decided the outcome, with Democrats winning by 336 votes in the 68th district, and 389 votes in the 85th district. These slight shifts in single voters’ decisions can change the entire future of any branch of government.

Others who believe their vote won’t make a difference believe that because their state always swings Republican or Democrat, no matter which party they vote for. This also comes with a misunderstanding of how elections work. A state only swings towards one party if a majority of people in the state vote for that party, meaning that your vote can change this swing. In historically conservative states, less than 50% of the population voted in the past presidential election. The other half of the population could have been enough to swing towards the Democrats, and they could have taken the electoral votes for themselves.

In a time where almost every political opinion is controversial, it is more important than ever to use your voice. As the next generation, it is also our duty to take responsibility and vote, especially as students. Officials you elect make decisions on student debt, funding for schools and college tuition reform. Only 17% of 18-24 year-olds cast a ballot in the 2014 elections. This needs to change, and with young people making up almost half of the voting population, those votes could have huge effects on upcoming elections.

No one will necessarily vote in young people’s interests except young people. Voter registration is easier than ever, with the Georgia voter registration almost exclusively online. Make the changes you want by voting for representatives you feel will make those changes, and register to vote by Oct. 9.  Here’s the link to register online in Georgia: https://registertovote.sos.ga.gov/GAOLVR/welcome.do#no-back-button