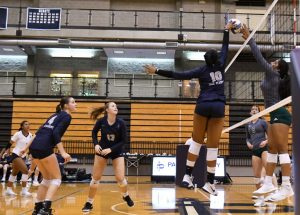 Kalissa Greene (No. 10) dumps against Westminster’s outside hitter on Sept. 4. Photo: Fred Assaf

After last year’s first ever state championship victory, the varsity volleyball team is working hard to repeat their incredible achievement. The team began practices the last week of July and has not stopped practicing since. The season officially kicked off at home on August 10 with a 5-0 win over North Atlanta High School. Many of the schools the team played at the beginning of the season are much larger than Pace. For instance, North Atlanta is more than three and a half times the size of Pace’s Upper School with an enrollment of 1734.

Head Varsity Volleyball Coach Anna Bush thinks that playing these larger schools will prepare the girls for region play. “We are playing a lot of really good teams,” she said. “That’s very important. It’s hard to learn anything when you are not pushed, and fortunately we’ve been able to schedule schools that we feel are going to challenge us, so we can be prepared for area play as the season progresses.”

Coach Bush stressed the need for the team to begin the season with a good mental state. “Most of our starters are returning, so I think a lot of it this year is team chemistry and trying to stay humble,” she said. The team’s roster is made up of 15 experienced and skilled volleyball players. PrepVolleyball.com named junior Ada Jane Agoli and sophomore Kalissa Greene as Club All-Americans, with Agoli on the U16 Highest Honorable Mention team and Greene on the U15 first team.

This year, there are two new girls on the team. Morgan Neil is a freshman who plays in the back row as a defensive specialist. “Being a freshman on the team is extremely fun,” said Neil. “It is very exciting to be a part of such a great team that always has fun together.” Sasha Ratliff is a junior who is new to Pace this year. She plays middle hitter but, she will not make her Pace debut until later this season. “It’s really great to be a part of a new team and get to know new people,” said Ratliff. “It has definitely helped the process of getting used to a new school. They really helped me feel included from the start of the season.” Ratliff is not eligible to play in games now due to her transfer to Pace from St. Francis High School in Alpharetta.

Alexandra Baker, a senior on the team who has played on varsity all four years at Pace, is a leader for all the players whether they are new or returning. “I don’t try and take charge of things,” she said. “In the end we all kind of lead together as a team.” Baker was a key contributor to helping the Knights secure their victory over Westminster in the state championship last year.

One of Coach Bush’s main goals for the girls this season is to adapt to the circumstances of the game. “You might have a game plan coming out, and then in the middle of a match something happens that you don’t expect and you have to adjust,” said Coach Bush. “I want my girls to think for themselves and have the ability to adjust at a moment’s notice, whether it be defensively or offensively.” Coach Bush says she is very optimistic that the girls can accomplish any and all of their goals. “We have a good group of girls. Like I said, it’s more just meshing the personalities and trying to agree that we have a common goal and want to work towards that goal and support one another.”

As of press time on Sept. 21, the varsity girls volleyball team had a record of ____ , The team plays at home next on Oct. 4 for Senior Night and a double header at 5 p.m. against Hebron Christian and 7 p.m. against Marist School.