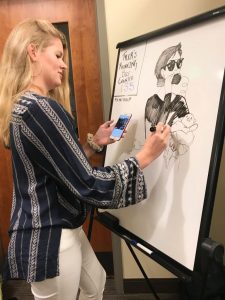 As students in the 21st century, we have grown up and watched the world of technology boom around us. The technology isn’t the only thing changing, though: we become more and more addicted to it every day.

In 2007, the year of the first iPhone, Apple sold 1.4 million iPhones worldwide. Ten years later, Apple’s iPhone sales amounted to over 216 million. While it seems that everywhere we look someone has an iPhone, Apple actually only controls about 12.1% of the smartphone market and is eclipsed by both Samsung and Huawei, which hold 20.9% and 15.8% of the market share, respectively. Smartphones are on the rise and reaching a greater worldwide population daily.

Many students turn to their phones to cure boredom, but in some cases, phones are a necessity. The cellphone allows for instant contact for parents who need to touch base with their children. Additionally, just under 90% of surveyed upper school students responded that having their phone at school helps them feel safe. This likely relates to the easy access to parents and emergency contacts that having a phone handy provides.

While nearly half of responders primarily use phones for social media, more than half utilize them during the school day to check their email or their homework. So, a ban is out of the question. But what effects are phones having on the classroom experience?

Recently, scientists published research regarding the issue in a journal called Educational Psychology. The experiment involved two groups of college students learning the same material from the same teacher. However, one group was able to use phones and laptops while the other was not, unless they were needed for a classroom activity. Overall, the students who did not use phones scored half a letter grade higher than those who did. The use of the cellphone diminishes the student’s ability to retain information.

There is no easy solution to this problem. Inside the classroom, many teachers require students to place their phones in a basket upon entering. Over 75% of surveyed students responded that at least three of their teachers require them to keep their phones in a basket or to otherwise put them away, and this number has grown from previous years. However, there isn’t and shouldn’t be any limitation to a student’s ability to use their phones during free time. Phones offer many advantages, as long as students have the desire to manage them correctly.