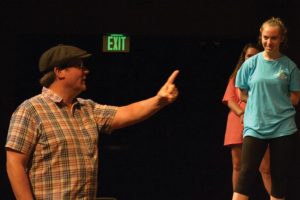 Pace Academy theatre fans and musical connoisseurs are in for a treat this school year, as Upper School Visual and Performing Arts Chair Sean Bryan announced his production selections at the annual theatre kick-off picnic on Aug. 15. Roughly 40 upper school students attended, including many new freshmen.

This year Mr. Bryan held a full week of auditions from Aug. 27-31 after school, rather than holding separate auditions throughout the year for each show. At auditions, Mr. Bryan selected the cast for three productions: “Almost, Maine,” “Beauty and the Beast” and “Disaster!” “Students will appreciate having their parts laid out for them from the beginning,” said Mr. Bryan prior to auditions. The cast lists were posted online Sept. 3.

The year will begin with the one-act play “Almost, Maine” from Oct. 11-12. “Almost, Maine” is an eccentric mesh of connected love stories, each focusing on an alluring couple with their own individual back stories. “The one-act’s announcement was interesting, since nobody had really heard of it,” said sophomore Jack Brown. However, Mr. Bryan is confident that the show is a beautiful and authentic way of telling the story of self-discovery and realization. The show will star just nine students. “I’m really excited for a small cast because it gives us a chance to perform our best and have more one-on-one time with our director,” said sophomore actress Alivia Wynn.

Students seemed to be most excited about this year’s fall musical announcement. “When they announced “Beauty and the Beast,” everybody went crazy since it’s such a well known story that we all want to be a part of,” said Brown. “Anything Disney is just a really great show,” said freshman Shalizeh Thobani. Simplified, “Beauty and the Beast” follows spirited, young Belle as she enters an arrogant prince’s cursed castle and falls in love with the initially cold-hearted Beast. Senior Grace Pottorff and junior Andrew Miller were cast as leads Belle and Beast, respectively. “Learning how to embrace the story as Pace’s own and make it an original production is our focus,” said Mr. Bryan. His charge for all actors this year is to introduce their own individual on stage and add depth to the characters that most of the world has already figured out. The show runs Oct. 25-27 in the Fine Arts Center.

After “Beauty and the Beast,” the Pace community can look forward to the fourth annual Winter Showcase, running Jan. 24-25. In the first semester, students will work on writing and directing their own scenes and casting their peers in order to showcase their talents. Mr. Bryan is excited to see the ideas that his students come up with, and is delighted by the leadership and involvement he has already witnessed in just the first few days of school.

Mr. Bryant has selected a second musical production for the spring semester, rather than the typical play. “Disaster!,” a musical comedy, will run April 26-27. “Disaster!” tells the story of the opening night of a floating casino and disco in 1979 New York City when a series of natural disasters, including earthquakes, tidal waves and infernos, plague the club and its patrons. The show, filled with 1970’s jukebox classics, parodies classic disaster movies. Some of the comical, unique parts include a sexy nightclub singer with her eleven-year-old twins, an older couple with a secret and a nun with a gambling addiction. “The show provides many opportunities for multiple singers to have solos, as well,” said Mr. Bryan.

Both “Beauty and the Beast” and “Disaster!” are shows that require creative, technical work behind the scenes. “Rather than hiring somebody to come to Pace and work on the tech elements, I’m more interested in hiring somebody to teach my students how to work the tech elements themselves,” said Mr. Bryan. Juniors Julia Kelly and Lauren O’Sullivan, who both helped costume last year’s “The Laramie Project,” are excited to continue their involvement by constructing Belle’s iconic yellow gown for this year’s “Beauty and the Beast.” According to Mr. Bryan, students who are interested in working on tech work or design are both welcomed and needed.