Pace Athletics Weighs in on Player Safety After Maryland Tragedy 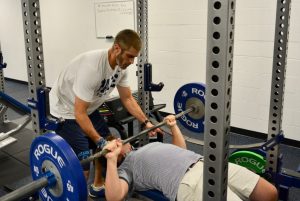 It was a hot day on May 29 when 19-year-old Jordan McNair collapsed at football practice and was rushed to the hospital. Despite doctors’ best efforts, the junior offensive guard at the University of Maryland died from heat stroke on June 13. “They crossed the line between wanting to be competitive and pushing them hard and just not being aware of safety concerns and what’s best for the individuals,” said Pace Athletic Director Troy Baker.

McNair had difficulty finishing a set of sprints on his own but the coaches forced him to keep going. He had a body temperature of 106 degrees when he was examined at the hospital. “I was not there, but it is hard to believe that the certified athletic trainers on their staff would let this happen,” said Pace Strength and Conditioning Coach Clement Rouviere.

Investigations continue into the events surrounding McNair’s death. Maryland athletic director Kevin Anderson fired head coach Randy Edsall after the incident. The president of the university, Wallace Loh, then assigned Anderson a six-month leave of absence, and Anderson resigned shortly before his leave was up. The Maryland football team honored McNair by leaving a spot open in his position on the first play of their opening game on Sept. 1.

Colleges are not the only ones faced with the issue of player safety during summer practices. Pace athletes also work very hard through the excruciating Georgia heat. But the Georgia High School Association has rules in place to keep players safe. These rules include max humidity to wear pads, unlimited water breaks and a cool down station on field which includes high powered fans. “This would never happen at Pace,” said Coach Rouviere. “If anyone at Pace passed out for any reason they would not be put back on the field.” The GHSA policies theoretically allow for a safer program, but policies mean nothing without strong integrity individuals to carry them out. “I have full faith in my staff to keep my kids safe,” said Dr. Baker.

“Between the three athletic trainers we have here and the excellent conditioning coach, Clement, the players are very well prepared to stay healthy and safe,” said sophomore Tommy Assaf. The staff at Pace are all nationally certified in the safety of athletes. Pace football, basketball, and other sports made it through the heat of the summer with no occurrences of heat exhaustion.