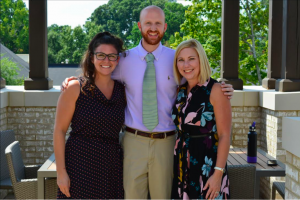 New faces join the Arthur M. Blank Family Upper School this year, bringing with them new lessons and perspectives. Allison Tarvin, Charlie Bryant and Kimberly Goodstadt are among the new teachers who have brought their expertise to the Academy.

Some may know the name Tarvin from middle school Latin teacher Stewart Tarvin.  In fact, Mrs. Tarvin, his wife, discovered Pace Academy through Mr. Tarvin after they worked 17 years together in Kennesaw at Harrison High School. “Pace is smaller, it feels more like a community, like a family,” said Mrs. Tarvin. “I already feel like I know some of my students better than I got to know them [at Harrison High].”

Mrs. Tarvin teaches Math Physics Honors and AP Chemistry. She earned her bachelor’s degree in public relations from the University of Alabama and her master’s degree from Georgia State University in science education. She was inspired to teach science by her eighth grade teacher, who taught her to “keep moving forward, keep asking questions and you’re going to get to the answer eventually.” When Mrs. Tarvin was asked if she had any advice for her freshmen students, she said that any advice could be simplified into being a kind person. Outside of school, she enjoys long walks in nature, and going to her lake house with her husband and two children.

Mr. Bryant teaches AP Computer Science Principles, Intro to Programming and Robotics. Originally from Gainesville, he earned his bachelor’s degree from the Georgia Institute of Technology, majoring in computer science. Though he had many different options, he chose to work at Pace over the other schools. “The level of care that this community has for Pace itself and for each other differentiates Pace from other schools,” said Mr. Bryant. His classroom motto is, “have fun, help each other, learn together,” which supports his goal to help his students learn that computer science is fun. He wants to spark their curiosity to learn more about the subject. Mr. Bryant enjoys the outdoors, and plans on hiking part of the Appalachian Trail. He also plays ukulele and enjoys reading fantasy and science fiction.

Ms. Goodstadt comes to Pace from Savannah Country Day School, and is the new Pre-Calculus and Algebra II teacher and girls soccer coach. She earned her bachelor’s and M.S.T. degrees from the University of New Hampshire. Her favorite part of teaching is when her students’ “faces light up when they’re understanding something and solving something correctly.” She has been teaching for seven years, and even volunteered as an English teacher in South Africa. Ms. Goodstadt had heard about Pace from Savannah Country Day Head of Upper School Jonathan Day who used to work at Pace, so she decided to apply when she moved to Atlanta. She has taught all ages and levels of math, from five-year-olds to college levels. Outside of school, she enjoys spending time with her dogs and hiking.