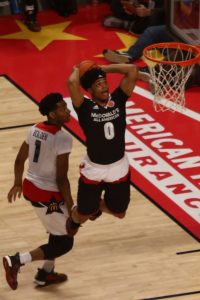 BREAKING NEWS: This just in, reports state that (player / college) has (accepted / given) improper benefits, violating NCAA rules. It seems like every day a new scandal hits the college sports world, where an athlete violates one of the innumerable rules or regulations set forth by the NCAA that can put their eligibility at risk. While not the only problem the NCAA faces, one of the most common causes of these scandals is the refusal to allow athletes to be paid while in college.

Since 2000, some of the most dominant athletes in college sports have had their legacies permanently tarnished due to violations of NCAA rules. Big names such as Cam Newton, AJ Green and Reggie Bush all were punished for profiting off of themselves, despite being some of the most recognizable names in sports. Newton’s case saw him accept improper benefits while being recruited by top notch schools, while Green sold his game-worn jersey for a profit.

Bush had both the most severe act and punishment, which saw him accept $200,000 in gifts and donations from an agent. As a result, Bush was forced to vacate his 2004 Heisman Trophy, and his school USC was hit with a two-year postseason ban. These actions are not justified, and the athletes involved did break the rules, but the problem is the rule itself, not the choice to not follow it. In all three of these instances, the athletes in question went on to successful professional careers, and their legacies are damaged forever for just a fraction of what they have made as professional athletes.

While the ideal situation would be that the NCAA, which topped $1 billion in revenue in 2017, find a way to satisfy athletes’ financial needs. However, that does not seem like a legitimate possibility. The bare minimum that the NCAA should do is simply allow for its athletes to sign endorsements and other forms of income while in college. Support has been building for years around the idea of collegiate athletes being paid. “For all the publicity and revenue that athletes create for the NCAA, they should definitely receive something in return,” says senior and Boston University commit Kayla Ross. The NCAA has recently taken steps in the right direction, because “elite” basketball recruits are now eligible to sign with an agent as a high school senior.

Paying athletes would have several benefits, for the NCAA, for the fans and for the athletes. First of all, allowing players to be paid would put an end to shady deals that could put eligibility in danger. Also, the controversial one-and-done era of college basketball could come to an end, since many athletes are enticed by the guaranteed millions of dollars that come with being drafted. But, if athletes have a consistent income, then they could develop more as players and maximize their potential ability.

However, some believe that college athletes should remain amateurs. “Athletes are already paid in scholarship money,” argues senior Andrew Konradt, who is currently committed to Trinity College for lacrosse. “Trying to decide who to pay and how much to pay them would create chaos in the collegiate community.”

While opinions may vary, most can agree that the NCAA must make a firm decision instead of remaining in limbo. Hopefully, they will reward those who are responsible for the organization’s success. Pay your players, NCAA.