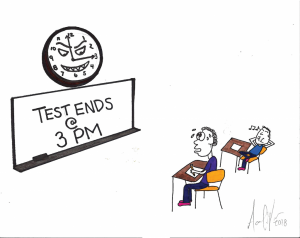 Some students are allowed to work past the designated constraints for timed assessments, while others are not. As a result, extended time sparks polarizing debate at Pace Academy. On one side, students without extra time argue it is an unfair advantage. On the other, students who have it claim it is necessary for their success. Whether it sabotages a fair testing environment or not, the extra time testing process and the ways in which it is enforced are flawed.

Educators at Pace hope to test a student’s reasoning and critical thinking skills, as well as preparation, above their ability to finish within an arbitrary time allotment. Extended time is a tool used to aid those with ADHD, dyslexia, dyscalculia and other learning differences. The mission of extended time may be virtuous, but the unusual practices of students at majority white elite private schools have lumped together the honorable and the fraudulent. The result: regular time students discredit all of their extended time peers.

ABC News reports that at some elite schools, up to 46 percent of students receive special accommodations to take tests. Of the 107 sophomores, juniors and seniors that responded to a recent Knightly News survey, 40% said they had extended time. But the true proportion of students with accommodations is 28% at Pace, so the system is credible. This data also suggests that as standardized tests loom, the proportion of students with extended time rises.

This problem comes with a simple solution: take time out of the equation. The SAT, ACT and Pace alike should allow students as much time as they want. Instead of time limits, there should be word limits on essays. Standardized tests should gauge aptitude, not speed. ACT and SAT rooms should be open for six hours with students going at their own pace. Students should be able to take their own breaks and arrive or leave on their own time.

Pace tests could be given last period and everyone should be able to finish by 4 p.m. The stigma about turning tests in early needs to go away and all students should be allowed to type their tests. Extended time is a cheap solution that breeds corruption when teachers could just reformat the way they assess their students. For example, students that are allowed to leave the testing room then come back later in the day have an advantage. Even if they are not looking up the answers, the student still contemplates the assessment. It is common to hear students realize answers minutes after leaving the testing room, but for most, they are not allowed to go back and write them down.

Even the extended time approval testing is not perfect. “There were these random tests where I had to look at a computer screen, and when a box flashed I had to press the spacebar as fast as I could,” said an anonymous student. “I could have easily cheated.” Worse still, the price point hinders those who need extended time for lifelong documented disabilities from getting it. “It costs about 3,000 dollars,” said the student. “Talk about a waste of money.”

There is financial aid available for students who need testing for accommodations, but this opportunity is not widely available or taken advantage of at all schools. Pace students already have access to the bountiful resources of tutors, outstanding teachers and books, and these are all advantages of wealth. Extended time is a corrupt result of society trying to make everything “fair.” This practice does the opposite; it gives wealthy kids yet another advantage.