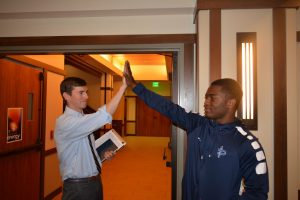 Although the building is different, Ben Ewing is no stranger to the Pace Upper School. Atlanta native and Pace alumnus Mr. Ewing ’06 has returned to the school as the freshman dean and honors biology teacher. “I had an opportunity to teach science and just as importantly take on this dean role,” said Mr. Ewing. “What I enjoy most about schools is working with students figuring out high school, so I could not have thought of a more exciting position than being back at Pace.”

From his years as a Pace student, he specifically remembers DBQs in now Head of Upper School Michael Gannon’s class, a 1400-word paper on the economic imperialism of French history in History Department Chair Tim Hornor’s class, a Greek battle activity where all the desks were removed in history teacher Emily Stevens class, and ceramics in the FAC.

Mr. Ewing chose to pursue biology because of his love for learning and growing. “I really like finding out how things work and there is nothing in my mind that is more interesting than figuring out how living things work because we are living,” said Mr. Ewing.

After high school, Mr. Ewing attended Presbyterian College in South Carolina. He earned his bachelor’s degree in biology and a master’s degree in independent school leadership from Columbia University. Mr. Ewing is widely known for his lacrosse career at Pace, when Mr. Gannon was head coach, and in college. “I went from Pace Academy where we were a great team with a well respected coach,” said Mr. Ewing. “I then went to a not great team where we were a first-year Division One program and we got crushed every year.” Despite this, Mr. Ewing developed some of the closest relationships with his teammates that he will treasure forever. “We learned that we can endure hardships and I cherish those moments.” Following college, Mr. Ewing became a faculty member and lacrosse coach at the Asheville School in North Carolina where he was awarded the Ornduff Master Teaching Award, an award given to a teacher who embodies the principles of the school.

Arguably some of the most interesting years of Mr. Ewing’s life are the two years he spent in Fiji with the Peace Corps. In graduate school, he was inspired by two women, one being a Pace Academy alumna, who both dedicated their life to service, and he wanted to do the same. “Part of it for me was gaining a new perspective because I worked in an independent school and have gone to a private school,” said Mr. Ewing. “This is not the reality that most people live.”

When he landed in Fiji, Mr. Ewing was taken in by a Fijian family that made him feel as if he were always a member of their home. “They saw me and said this guy can use some help and took me in as family,” said Mr. Ewing. “To this day, I keep in touch with them and will for many, many years to come.”

He interacted with people with a wide range of ethnicities from Fijian to Indonesian to Muslim, all with their own unique culture. “What I took away from the iTakei culture is that it was much more communal,” said Mr. Ewing. “People don’t ask what you do, they ask you about your family.” He really internalized how the iTakei culture was dominantly communist while the Indo-Fijian culture was mainly individualistic.

When Mr. Ewing returned to the U.S. on July 15 he moved into his new apartment that same day. “I haven’t had a chance to stop and really reflect, which is something I really need to do,” said Mr. Ewing. Upon his return he has been occupied with moving residences, learning Pace culture again, and getting accustomed to his new role as a dean. He hopes to soon take time alone and reflect on his time in Fiji.