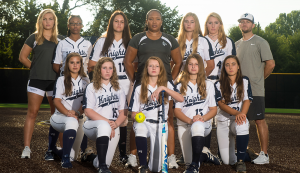 Storming in with four straight wins in the first two weeks of school, Pace Academy’s varsity softball team makes the spectacular seem routine. After a successful season of 16-9 highlighted with beating long time rival Westminster for the first time in eight years, varsity softball has a newfound confidence this season. Head coach Jewell Marable has set big goals for her athletes as she strives to win region and to be in a strong position before playoffs. How does this team fight through adversity as key players have graduated and almost half the team is new to the sport?

After 11 years of coaching, Marable never regrets her decision to be a softball coach because of her love for the game. Softball has significantly changed since she was a student and played softball in high school, but she still embraces the challenge and experiences of coaching. She applies her lessons from being a player to help orchestrate her team. “The most rewarding part of coaching is seeing the girls succeed and the wonderful experience of getting to bond with the girls outside of school and academics,” said Coach Marable. This satisfaction comes strictly from her approachable and direct coaching style that looks to motivate and improve players.

The journey to a prosperous season begins with a plan. In Coach Marable’s eyes, varsity softball overcomes adversity through practice. “What you do in practice is how you play, just like what you do at home or behind closed doors and out in the real world is going to be seen,” she said. Softball players are expected to practice every day depending on their game schedule that week. Each drill in practice is intense, yet the team has a welcoming approach to reviewing basics with new players. Coach Marable makes sure no one is ever left out of drills and “every individual knows that they have a place to go, to be, and something to do.”

Beyond practice, the key to winning is having a more competitive mindset that allows players to be more confident in their level of play. Going against rivals like Lovett and Westminster is only one factor. “Lovett is no different from the teams we competed with from beginning to end, from inning one to the end,” explained Coach Marable. Keeping the tone going and keeping the morale of the team has been a component of winning close games against teams like Fannin County High School this season. Coach Marable knows that brushing off mistakes, communicating and “talking the game through the whole game” will allow her girls to mentally and physically progress this season.

This is one of the smallest and youngest varsity softball teams in Pace history with only one senior, Calean Corbally. However, Corbally feels no pressure as the only senior. “There isn’t very much pressure because we are like a family who all lead each other,” she said. She has played on the varsity team for four straight years which strengthens her trust and confidence in her team. “As long as we all do our part on and off the field, there should be no reason we don’t succeed,” Corbally said. Despite the disadvantages of a young team she still has high goals of “winning region and hosting the first round of state,” similar to the goals of sophomore teammate Sydney Silverstein.

“Despite her young age [Silverstein] is one of the girls that can play at the highest level as a pitcher given her dedication and commitment to softball,” Marable says. Silverstein’s older sister first got her into the sport, but then she fell in love with the game and has played for nine years. Silverstein’s leadership comes from her opportunity to play on the USA softball team with fellow teammate, sophomore Jamie Kornheiser, last summer in Israel where they faced the best young athletes and won a gold medal for Team USA. She hopes her international softball experience will allow her to be “positive and encouraging” and push this softball season to new heights.

Nonetheless, what Coach Marable and Silverstein have realized is that softball is more than stats and bigger than themselves. “Outside of softball I would like for them to learn about teamwork, understand the importance of building relationships, know that hard work pays off, and build solid work ethic,” said Coach Marable. The team plays Westminster away on Oct. 1 at 4:45 p.m. and at home on Oct. 4 at 5:30 p.m. Oct. 2 is Senior Night at 5:30 p.m. at home against Cedar Grove. In their last matchup on Sept. 6, the Knights won handily over Cedar Grove 14-0.

Categories
SlideshowSports
Back to Top