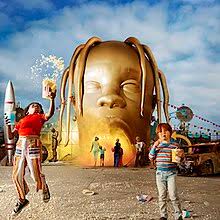 After years of anticipation, Travis Scott’s third studio album “Astroworld” has safely touched down, following an initial announcement all the way back in May 2016. To put that in perspective, while researching the album, I found a Vine clip announcing the title of the album (RIP Vine). However, both critical and commercial reviews indicate that Travis Scott has made the wait worth our time. “Astroworld” debuted on the Billboard Top 200 at No. 1, with its two singles, “BUTTERFLY EFFECT” and “SICKO MODE,” peaking at No. 17 and No. 4, respectively.

Scott’s tribute to his hometown Houston’s now defunct amusement park Six Flags Astroworld is a roller coaster ride, pun intended. The album goes through its twists and turns, corkscrews and loop the loops, and it takes the listener along for the ride. Following a safe output in the form of his previous release, “Birds in the Trap Sing McKnight,” Scott takes more risks and returns to his psychedelic roots. This most recent release takes what was great about his debut album, “Rodeo,” and adds to it, showing that Scott can not only learn from his mistakes, but also build from them to enhance his album.

The most obvious and prominent callback to “Rodeo” comes in the form of the beat switches aplenty littered through the first few tracks, including the opener “STARGAZING,” as well as the Drake-assisted “SICKO MODE.” These 180-degree turns in the midst of a song blur the lines where one song ends and another begins. Not every song on this album is going to last the test of time, but Scott organizes the album in an order that a full listen does not seem to drag on for hours.

What has garnered Travis Scott more praise by critics and fans alike, however, is his role in this album, which is more akin to a director than a lead actor. Scott has his fair share of high points on the album, and he is more than capable of carrying a track on his own – just check out “5% TINT” or “COFFEE BEAN” – but he uses both household names and rising stars to craft the exact sound that is needed.

Bonafide stars like Frank Ocean, Swae Lee, 21 Savage and Kid Cudi share the limelight with skyrocketing artists like Juice Wrld, Gunna, Don Toliver and Sheck Wes. Scott alludes to his new role by asking, “Who put this s**t together? I’m the glue.” He also decides to not include any of the features on the tracklist, in order to keep the focus on the music instead of the names involved, a strategy used before by Kanye West on “The Life of Pablo.”

Scott uses every one of his contemporaries in the right spots on the album, but he also looks back to those before him as inspiration. “RIP SCREW” is a dedication and tribute to late great Houston legend DJ Screw, and Scott also samples past tracks from the Notorious B.I.G. and Beastie Boys. The most surprising feature on the album comes by way of Stevie Wonder and his phenomenal harmonica on “STOP TRYING TO BE GOD,” that also includes an interpretative music video.

In a year with arguably disappointing releases from J. Cole and Drake, Travis Scott’s “Astroworld” for sure warrants a top three spot for album of the year. If you’re looking to play a few tracks for yourself, I would go with “SICKO MODE,” “NO BYSTANDERS,” “YOSEMITE” and “CAN’T SAY.” These songs show just a taste of the variety and star power of “Astroworld,” proving its place as one of the best albums of the year.