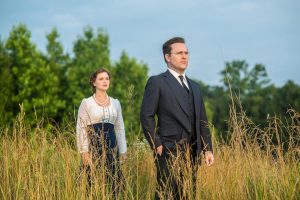 Pace has played a major role in the Wallace Buice Theatre Company’s production of “Parade,” a musical which is set to premiere on Sept. 27 at the Lyric Studio in Marietta. The Tony Award-winning show, written by Alfred Uhry with music and lyrics by Jason Robert Brown, takes place in early 20th century Atlanta, portraying the journey of Leo Frank, a Brooklyn-born Jew residing in Georgia. This true story follows the trial and lynching of Mr. Frank, an Atlanta Pencil Factory superintendent, who was accused of murdering Mary Phaghan, a thirteen-year-old worker in his factory. The Atlanta production is directed by Taylor Buice with Jared Bradshaw as Leo Frank. The show first appeared on Broadway in 1988.

After being asked to audition and sing a few of his songs, Upper School Visual and Performing Arts Chair Sean Bryan was cast as Judge Roan and the Old Soldier in “Parade.” The Old Soldier represents an old Confederate soldier who speaks nostalgically about Georgia and Judge Roan presides over Leo Frank’s trial. “The Wallace Buice Theatre Company is wonderful, and to have the opportunity to work with a lot of talented actors based in Atlanta is a privilege,” said Mr. Bryan. “There are a lot of talented actors from all over Atlanta in the show. It’s also a smaller venue with only 88 seats. With 12 actors and a nine-piece orchestra, it will be very powerful in that small space.”

After speaking with the artistic director of “Parade,” Mr. Bryan came up with a idea. The musical’s cast has rehearsed for several weeks in the Pace Fine Arts Center. In return, the Wallace Buice Theatre Company allowed Pace upper school theatre students to observe their rehearsals, allowing them to get first-hand experience on a professional set. “I really want our school to be more invested in the community and thought that this compromise was something that benefitted both parties and made the most sense,” said Mr. Bryan. In addition to the student observation, Bradshaw, a veteran Broadway star, hosted a free theatre workshop at Pace that was open to all students on Sept. 12. According to Mr. Bryan, the workshop included Bradshaw’s take on his experience with Broadway, singing lessons and coaching as well as singing songs for the students.

In addition to Mr. Bryan, “Parade” has other connections to Pace. Koby Parker, who choreographed Pace’s production of “Joseph and the Amazing Technicolor Dreamcoat,” plays the role of Frankie Epps, a local teen. Mr. Parker will be working on this fall’s “Beauty and the Beast” production at Pace as well. Also, Taylor Buice, the director of “Parade,” will direct the Pace One-Act, “Almost, Maine.” Mr. Bryan and Mr. Buice met during the production of “Jesus Christ Superstar” and became friends. After Mr. Buice started his own company, he became a director around town. “I thought it’d be great to have someone I trust direct the One-Act,” said Mr. Bryan. “I’ll be overseeing it as well, but he’s taking over the majority of it and I’ll step in when I can. [‘Beauty and the Beast’] is taking up so much of my focus, so he offered his services and the kids are having a great time.”

“Parade” runs Sept. 27-30 and Oct. 4-7. Tickets are available at www.wallacebuicetheatre.com.