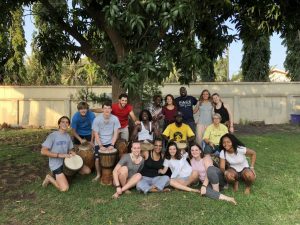 Over the first days of summer, teachers were consumed with grading exams and turning in final grades, but once they completed that daunting task, many took time to relax and travel. Some teachers ventured across the world on Isdell Center for Global Leadership study tours, while others stayed local or traveled throughout the United States. Although most faculty members had a fun and eventful summer, they are excited to be back with their students for this school year.

Math teacher Dr. Heather McCloskey spent much of the summer with her two children, Rebecca and Cal. She spent a lot of her break moving and getting settled into her new home, while also enjoying the summer weather at the pool with her family. Dr. McCloskey, along with her husband and kids, took a trip to Hawaii to visit her best friend from when she was a student at Pace. “Snorkeling was a lot of fun,” said Dr. McCloskey. “We also jumped off many waterfalls in Maui and went to the beach, which was also fun.” While her trip to Hawaii was full of excitement, Dr. McCloskey also spent a lot of time dragging her children along to different hardware stores to check out countertops and fixtures for the new house.

English teacher Robert Kauffman purchased a Eurail Pass this summer to visit Continental Europe and explore cities he had not been to before. After landing in Munich, he traveled to Hamburg; Ljubljana, Slovenia and Graz, Austria. “As much as I enjoyed the cities I visited, I really liked the train rides in between,” said Mr. Kauffman. “I particularly liked the smaller cities like Ljubljana and Graz because there weren’t many tourists, so I felt like I could pass as a local even though I wasn’t one.” Mr. Kauffman endeavored to be a flaneur, or a wanderer, while living the expression “not all who wander are lost.”

Class of 2020 Dean Grady Stevens spent the first two weeks of summer visiting his brother in Colorado and family in Pennsylvania. In Colorado, Mr. Stevens enjoyed long hikes in the Great Sand Dunes National Park and the Rocky Mountains National Park. He then put on his work hat and flew to Boston to take college courses at Harvard University. At Harvard he took American Foreign Policy and International Politics to earn his degree from the Ivy League school. “It was a ton of fun and an interesting summer to be studying those,” said Mr. Stevens. “It was a lot of work but very enjoyable for me.”

English teacher Emily Washburn ventured to Europe on an ICGL trip to London and then ended her summer in Hawaii on a family trip. Mrs. Washburn had studied as an undergrad in London which allowed her to relive some of her past experiences and make comparisons between London then and now. She particularly liked how she had the opportunity to visit London with a different purpose this time. In London, the group saw 11 different shows in many famous theaters. Her favorite moments in Hawaii included zip lining and snorkeling with her family. “It was my first time in Hawaii, and it was magnificent,” said Mrs. Washburn.

Director of Diversity and Inclusion Joanne Brown spent the first part of her summer taking a group of Pace students to “Tearing Down the Wall,” a diversity conference at Vanderbilt University in Nashville. “It was really a great experience for us and the students to witness leadership around that dialogue,” said Mrs. Brown. After returning to Atlanta, she led the ICGL trip to Ghana and Botswana in Africa. “I have to say, it was one of the best trips I have ever taken in my life,” she said. “What surprised me the most was how much I loved living in the tents and hearing the animals. The most exciting experience was asking our students to stand guard over our camp while we slept.” She appreciated the fact that it was possible to coexist with wildlife while understanding their prints and behavior.

Science teacher Kaylan Haizlip enjoyed a family reunion in Washington D.C., along with visiting her brother in Columbus, Ohio and her sister in Charlotte. She went fishing with her 12-year-old nephew in Columbus at Allen Creek. Dr. Haizlip attained her fishing license and bought her nephew a fishing rod to introduce him to the joy of fishing. “The whole summer was fun but a lot of driving,” said Dr. Haizlip. “A little too much driving.”

Spanish teacher Laura Agront-Hobbs traveled to Costa Rica for what she claimed was one of her best summers. She went zip lining, hiked volcanoes and visited Manuel Antonio National Park on the western coast. She also relaxed in the hot springs located near the volcanoes, which made the water very warm. Sra. Agront-Hobbs visited the hot springs often because there were eight of them where she was staying. “We had to go down, like, 500 steps and then back up to get to the waterfalls,” said Sra. Hobbs. “So I pretty much worked out every day even if I didn’t intend to.”