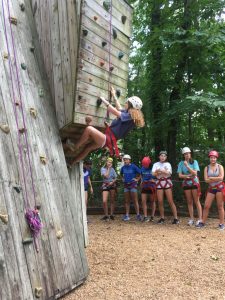 The freshmen gave their best effort to climb up the rock wall at Camp Skyline. Photo: Sarah Eden

With their athletic gear on and their sneakers laced up, the Class of 2022 departed for the annual freshman retreat at Camp Skyline in Mentone, Alabama on Aug. 10-12. After a two-hour-long bus ride, the freshmen were more than eager to step up and attempt the challenges that faced them.

The students conquered the various challenges ranging from ropes courses and canoeing to climbing with relish, while also fostering new relationships as they worked together. “I got to bond with my new classmates and make new friends by doing the activities and branching out,” said freshman Hannah Genser.

The freshman class gained 30 new students for the upcoming year. Attending a new school can be intimidating, but the new-to-Pace freshman students utilized the retreat as a means of branching out and as a result, experienced a much smoother launch into the high school environment. “I thought it was nice to get the awkward interactions out of the way before the first day of school,” said new freshman Jonathan Merlin.

The aim of the retreat, while intending to allow the class to develop their own bonds naturally, concentrated on forcing the students together to facilitate these bonds. “They actually got to know each other,” said Mr. Ewing. “They had forced interaction time like having to be there and be present, eat[ing] together, [doing] ropes courses together, and [sleeping] in the same bunks together.”

The three-day adventure was replete with risks and unconventional high school hangouts. Rather than burying themselves in electronics, most students expanded their horizons and attempted activities they hadn’t tried before. “Plenty of students already had a lot of experience with the ropes courses,” said Mr. Ewing. “I think that there are other students who really pushed their comfort zones and conquered fears and succeeded in ways that were really uplifting for the class.”

Accompanying the group of ninth graders were 18 senior peer leaders who guided the freshmen through their weekend in the woods and conducted activities such as singing songs and a grade-wide color war. The peer leaders acted as role models for the freshmen and helped ease their nerves upon facing upperclassmen at school. “I loved meeting and getting to know so many new faces that I now see in the halls,” said senior peer leader Regan Bates. “I know I was scared as a freshman to start high school and I’m hoping to make their transition less scary like my peer leaders did for me.”

Based on the retreat’s positive results, Mr. Ewing has high hopes for the Class of 2022. Although it is challenging to get to know 130 new faces in just three short days, Mr. Ewing is certain that this is a group that will prosper throughout their high school careers. “I am in awe of this group of students and the energy that they brought to the weekend,” he said. “I’m pumped to see what they’re gonna do.”