Class of 2019 Kicks off School Year with Retreat 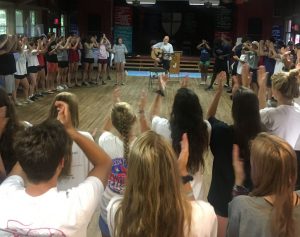 Seniors sing and dance along to Father Mike’s songs at the retreat. Photo: Pam Ambler

Seniors at Pace Academy headed up to Camp Mikell in North Georgia on Aug. 7 for the first-ever senior retreat. “We did the retreat because when I was in high school, I had the benefit of going on several retreats and I know how meaningful those experiences away from school can be,” said English teacher and Class of 2019 Dean Erica Barbakow. “We had to learn a lot about ourselves and our own strengths and weaknesses and how we could grow as people. The intended goal was for it to help long-term in the way we see the world around us.”

The retreat was a gift to the senior class as it allowed them to bond and see things that they wouldn’t have been able to see in an academic setting. “Being all together, away from our campus takes people out of those labeled boxes, like being a cheerleader or student council rep,” said Ms. Barbakow.

“We start you all out in the ninth grade when you’re basically still middle schoolers to help you become more cohesive as a class as you add roughly 30 members,” said Ms. Barbakow. “[At the ninth grade retreat] we did really active, outdoorsy activities, like the ropes courses, to build the foundation and the peer leaders are also very involved in that experience. But then we never really do anything like that again.”

Ms. Barbakow wanted give the senior class a similar experience that allowed for further bonding, but where each senior could also become introspective and reflective of their own selves. From singing songs to playing charades to predicting our 10-year reunion, the senior class spent the first two days doing a variety of activities.

“I loved the trip,” said senior Kayla Ross. “We did a lot of team bonding activities that made us a lot closer as a class. I got closer to people I didn’t expect and made deeper connections with friends and teachers.” Favorite activities were the charades night and the parent letter. On the first night, the seniors were split into two groups, and they were prompted to create a moment that was special to the class as a whole. Some recreated memorable moments from Spirit Week, and others, from Music Midtown.

On the last night, the seniors were surprised with letters from their parents. “I myself didn’t cry, like many people, but I was definitely emotionally triggered,” said senior Devan Johnson. “I always knew that I was ready for college, but it didn’t quite hit me that I was going to be leaving my parents and home.”

Although many people loved the retreat, some did get a little antsy. While some seniors disliked the bugs and the heat, others weren’t a fan of the camp or activities. “We just didn’t do anything adventurous like we did on the freshman retreat,” said senior Justice Jackson. “No ropes course, no lake, no nothing. There were some four square courts and balls to pass around during breaks, but my favorite part was 100% the white water rafting.”

Directly after breakfast on the third and final day, the seniors drove a little over two hours to the Ocoee River in Tennessee to white water raft. “I had the best time,” said Jackson. “I was so excited to do something adventurous and step a little bit out of my comfort zone. And it was also just hilarious seeing people fall out of the rafts.”

The retreat would not have happened without Ms. Barbakow, Administrative Assistant for Student Life Bowen Eagleson and a team of helpers: friend and mentor Father Mike Wallens and seniors Max Creasman, Paige Fleming, Merritt Ann Glass, Lane Goldman, Abigail Lund, Emily Pulver, Jacob Sloman and Raina Williams. “We met a few times in the spring and then again before the retreat,” said Pulver. “We just all threw out ideas. Like, I suggested the banner.” The banner hangs outside of Ms. Barbakow’s office on the fourth floor and reads “Class of 2019.” Scattered around the lettering are messages and quotes written by the senior class. “Some are inspirational quotes, others are just funny messages that [the seniors] love,” said Pulver.

After putting a lot of time and hard work into planning this retreat, Ms. Barbakow hopes that the tradition continues. “While it may not seem beneficial to everyone right now, we are going to look back at this experience and realize that it built a framework,” said Ms. Barbakow. “Sometimes it’s good to rough it. It tends to bring people together when they are in the trenches together. You could have it anywhere except for Pace. If we did have it on campus we would have on our ‘Pace faces.’ It’s not until we step outside of that, that it becomes something different.”