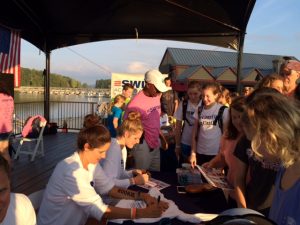 Be on the lookout for an email from sophomore Amalie Little, this year’s captain of the Pace Knights’ Swim Across America team. On Sept. 22, the annual SAA open water race for the Atlanta area will take place at Lake Lanier. This event raises money for cancer research, and the Atlanta chapter proceeds benefit the Aflac Cancer and Blood Disorders Center of Children’s Healthcare of Atlanta.

The Atlanta event is comprised of three races: the two-mile relay, the one-mile swim, and the daunting 5K. There are dozens of Olympians who make appearances at these swims across the country, including Ryan Lochte and Michael Phelps, as well as Missy Franklin and Amanda Weir, who will be attending the Atlanta event.

Swim Across America was created in 1987, when Jeff Keith and Matt Vossler decided to “raise money and awareness for cancer research, prevention and treatment,” and hosted their first fundraiser with friend Hugh Curran in Nantucket, Massachusetts, according to the Swim Across America website. Now, 31 years later, SAA has raised over $75 million between their many open water and pool swims across the country.

“I think [Pace] has been participating as long as [Swim Across America] has had a swim here,” said Swim and Dive Coach John Ague. Coach Ague himself has participated in two of these races, swimming both the mile and the two-mile relay. “This is going towards supporting research in our area, which is important, and it’s a fun way for old and new swimmers to get together and do something,” he said.

There will be a couple of fundraisers this year, including a Willy’s night and a dress down day for those who bring in $5. This year, Little hopes to “get more young kids involved, and overall, have more participants.”

About a month before race day, SAA has raised over 80% of their goal of $500,000 for this year. If you want to donate to this cause, you can visit the Atlanta Swim Across America website or text SAA to 24587.