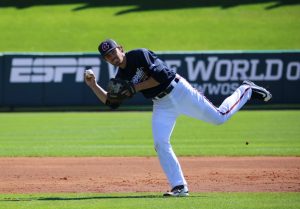 Atlanta Braves shortstop Dansby Swanson looks to take the next step in order to help the Braves contend for a playoff spot. Photo: Wikimedia Commons

As the frost melts from the fields, a brand new Major League Baseball season has kicked into gear. This season is arguably the most hyped in recent memory, as the MLB finds itself in a transitional period with a significant influx of young talent rising up through the minors. Old veterans will be trying to make one last gasp for a championship, while up-and-comers look to cement themselves as household names for years to come. With the young season kicking into gear, here are ten bold predictions for the 2018 MLB season: