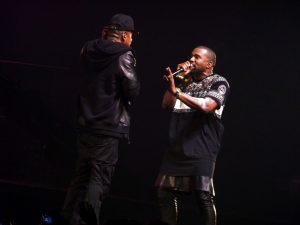 If one word could describe the last 12 months of rap albums, it would be collaboration. Over the past year, numerous top-tier rap artists producers have teamed up to unite different fan bases and create interesting pairings.

Such examples include Future and Young Thug’s Super Slimey, Gucci Mane and Metro Boomin’s Droptopwop, 21 Savage, Offset and Metro Boomin’s Without Warning, and Quavo and Travis Scott’s Huncho Jack, Jack Huncho. All of these team-ups can pay tribute to the original collab album, Watch the Throne by Jay-Z and Kanye West.

Flashback to 2011, Jay-Z, three years removed from his album The Blueprint 3 that included his only number one hit, “Empire State of Mind,” decides to team up with contemporary and fellow megastar Kanye West, riding high from his fifth studio album, My Beautiful Dark Twisted Fantasy. Fans eagerly awaited this mashup of two of the biggest rappers of the 2000s, and the long-anticipated album did not disappoint. The critical and commercial success that this album saw kickstarted a new subgenre of hip-hop, the collaborative album.

Watch the Throne debuted on the Billboard 100 album chart at No. 1, unsurprisingly, and featured seven singles, some faring better than others, with the most successful song from the entire album, “Ni**as in Paris,” breaking the top five of the Billboard 200 song chart. The collab was nominated for seven Grammys, winning four of them.

Over the course of this album, West and Jay-Z both gallivant and flaunt themselves, proving just how much better and wealthier they are than you. Both are head executive producers on the project, and both use their prior experiences to create squeaky clean beats to capitalize on their deliveries.

The opening song on the album, “No Church in the Wild,” flows cleanly as Jay-Z, Kanye and Frank Ocean melodiously cascade through the anthem. Ocean’s harmonious, auto-tuned crooning contrasts well with West’s gruff punches. Kanye and Jay-Z later sample the late, great Otis Redding in the song “Otis.” Redding displays his scat singing ability, while the duo braggadociously advertise their collection of cars and jewelry, while at the same time relaying the idea that nobody can knock them from the top of the rap game.

The best sample of the album comes from the song “Ni**as in Paris,” as West and Jay-Z borrow a scene from the 2007 comedy “Blades of Glory.” The line sampled, “nobody know what it means, but it’s provocative. It gets the people going,” describes the entirety of the album, as well as the duo’s complex personalities. There is an aura that draws fans to the two, especially West, despite their antics and controversies offstage.

Despite being released almost a decade ago, Watch the Throne still holds up to new releases of 2018 due to its high-quality production and relevant lyrics. Jay-Z and Kanye both took advantage of the high-profile release, by combining their collective strengths to release the best collaborative album the rap world has seen to date.