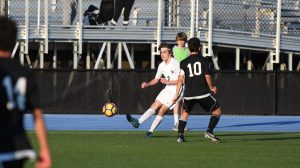 The varsity boys soccer players had big shoes to fill after the graduation of nine seniors a year ago, all of whom played a big role on last year’s state runner-up team. “Any time you lose high character impact players, you are going to struggle with replacing them,” said Head Coach Lucas Moreno. “We also had other seniors last year that were great role players for us and they positively affected the team.”

Will Nulty is the team’s lone senior this year, so the majority of the starting lineup are underclassmen. “Younger players now have an opportunity to step into leadership positions and become the bedrock of role models we need for a new team atmosphere,” said Coach Moreno. According to Nulty, sophomores Cole Ankenbrandt and Jesus Tadeo have really stepped up and taken on those leadership roles, leading by example.

With the majority of the team being freshmen, the varsity soccer program has built a solid foundation for the future. “We all kind of support each other,” said freshman Jack MacRae. “I think a lot of us are going to lead the team pretty well once we get older.” The freshmen show a lot of promise, and junior Colm Pelletier said that they will make for key contributors for the next three years.

The team started their season off with a win in their first scrimmage against Dunwoody High School, but they have a 6-12 win-loss record due to the difficulty of their schedule. “We’ve had a really hard schedule this season,” said Nulty. “But the good thing about having such a hard schedule is that they help prepare us for the tougher games in the playoffs.”

The Knights suffered narrow losses to local rivals, including Lovett and Woodward Academy, 0-1 and 4-5 respectively. The team’s initial goal was to be at least the second seed in the region, but they did not make the playoffs. “We got into a lot of our games with an underdog mentality,” said Pelletier. “We play some of the best teams in the state and for us to keep the games competitive, it’s key that we have a high energy level.”

The Knights played exceptionally well versus Blessed Trinity on April 10. They displayed a high degree of team chemistry, and their solid defensive backline did not allow a single goal, which greatly contributed to their 2-0 win over the Titans. On Senior Night, April 19, the Knights had a big win over Starr’s Mill High School, defeating the Panthers 4-2 to close their season.

Pace boys’ soccer ended their season with a 6-12 win-loss record, but they will be back next season with a strong incoming freshman class and returning sophomores.