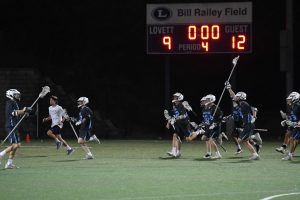 Although many believed that this season would be a rebuilding year for the varsity boys lacrosse team, the Knights had a fantastic regular season, ending with an overall record of 13-5. The Knights have not had a winning record this notable since 2006.

Early on in the season, the Knights had great success against teams such as Carrollton High School, Mount Vernon Presbyterian High School and Woodstock High School. “Playing these straightforward games was a great way to start off the season and to build some momentum for the more difficult games later on in the season,” said senior captain Joseph Adams. “Having these wins under our belt gave us confidence and made us more fluid and coherent as a team.”

The team continued their success in a crucial win against Fellowship Christian High School leading into spring break. Even though the Knights faced some adversity in the goalie position, missing starter Kirk Spinelli, they notched a close 11-9 win against Fellowship. After returning from spring break, the team was challenged by an athletic powerhouse in Marist High School, and lost 8-10 in a competitive 48 minutes of play. “I’m glad we played Marist when we did,” said junior Patrick Thurman. “It was a good wake up call for us to shake the rust off from spring break and get us focused again on the season.”

Following the tough loss to Marist, the lacrosse squad went on an impressive win streak against East Paulding High School, North Atlanta High School and Mount Paran Christian School. Even more exhilarating was the win against The Lovett School, a program that the Knights had not beaten in over a decade. The team cruised on that momentum and went on to beat Whitefield Academy in a gritty competition to secure a playoff spot in 1A-5A Area 2.

Following Whitefield, the Knights had a tough week, taking narrow losses to The Westminster Schools and Kell High School. Losing those two area games earned the Knights the third seed. The team rallied to secure a commanding win against Kennesaw Mountain High School to finish out their regular season.

The Knights faced off against Blessed Trinity High School on May 8 for the first round of the playoffs. The team played with heart, but was unable to come out on top with the win. “Overall we had a great season,” said Adams. “I’m sad the season ended how it did and I’m gonna miss the team next year, but I’m excited to see what they can do come next season.”