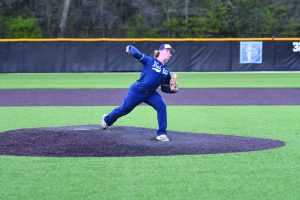 Junior Andrew Jenkins was a big part of the team’s success in 2018. Photo: Fred Assaf

As Morgan County recorded the last out, thus ending the Knights’ season, the players stood in shock. The realization slowly set in that there would be no practice tomorrow, or Monday, or any day until next January. But even with the season ending, there was still much to celebrate for the Knights and their strong 2018 campaign.

The Knights finished with a 23-10 record, with big wins against teams such as Westminster and Redan, and a first round playoff sweep of Adairsville. The Knights were also the first Pace baseball team since 2014 to advance to the second round of the playoffs. Throughout the season, each and every player made contributions to the team’s success.

On offense, junior Andrew Jenkins led the team with a .516 batting average, 47 RBI’s, and eight home runs, including two in the first game against Adairsville. On the mound, junior and team “ace” Brian Zeldin led the way with 47 strikeouts, and senior Jaden Steagall finished the year with a 1.512 ERA. Even though these players shined, every player made his contribution any chance he could. “Every player knew his part on the team, and was able to perform that task beautifully, however big or small it was, and that’s something special,” said junior TJ Rafeedie.

One of the biggest stories of the 2018 season and a big part of the team’s success was not seen on the field, but off of it. As the team gathered in the back parking lot for their final goodbyes, senior David Roos said: “I have never been closer to a group of guys or a team in my entire life. I won’t forget this anytime soon.” His sentiment sums up the atmosphere around the team this season: that of a family.

“It’s amazing to me how a group of 18 people can come together from all different grades, some of them having never even met, and form a bond like this,” said senior Zeke Diamond. “It’s something I have never seen before, and it helped contribute to the success we had.” The family atmosphere created memories that will last a lifetime, such as the infamous “Fight Night” in St. Petersburg, or the daily heckling in hitting competitions with comments like “Blaaaeeee” and “Maaaaee” or “DT” in order to distract the hitter.

Even while graduating five seniors, the team is returning seven juniors, four sophomores, and two freshmen next year, who, with the experience of the 2018 season, are poised to make a deep playoff run come 2019.

Whoever you ask, whether it is a coach or a player or even a fan, the same word describing the team comes up over and over again: special. With the senior leadership of captains Roos and Steagall, as well as leadership from seniors Diamond, Ryan Mazur and Ben Bernstein, the team had the experience needed to create a special season, and that they did. Through the play on the field, and the bonds formed off the field, the 2018 varsity baseball team was truly special.