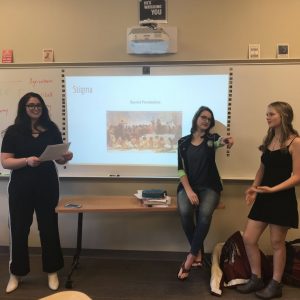 In 2018, everyone is a feminist. Or is feminism the forbidden f-word? Controversial or not, feminism affects everything. Look at Pace, a school with young men and women learning together, aiming to attend college and later take up similar jobs. Two centuries ago this was impossible. Without the suffragists of the early 19th century, women wouldn’t even have the vote. Earlier feminists, like Mary Wollstonecraft, also fought for equality. And even women of antiquity sought their rights: take, for example, Roman women protesting the oppressive Lex Oppia.

So what’s not to like about empowering women? Merriam-Webster defines feminism as “the theory of the political, economic and social equality of the sexes.” It’s difficult to find people in America today who disagree with the idea that women and men should have equal rights. And yet, a 2016 Washington Post poll found that 30% of women and 50% of men do not identify as feminists. Why are people who support equal rights so hesitant to call themselves feminists? This wariness seems to stem from two basic problems.
Most feminists have heard the term “man-hater.” Individuals using this word see the movement as a sect that believes women are superior to men. Even around Pace, people are uneasy to join what they perceive as the “anti-man club,” the Feminist Alliance. But feminism has never been about hating men. Feminists, from the suffragists to Malala Yousafzai today, strive to lift up women to the same rights as men.
It is true that some people claiming to be feminist think men are inferior. These people are not feminists, but misandrists. Merriam-Webster gets straight to the point: misandry is “hatred of men.” These “feminists,” often found on social media spreading the hashtag #allmen, falsely claim the movement and cause others to avoid it. But true feminists honor the movement’s meaning and advocate for equal rights between men and women. Actress Emma Watson summed it up nicely: “We just want to be treated equally. It’s not about man hating.”
In the age of the internet, it is easy to find posts calling out the patriarchy. And it is clear that across the world, females still lack rights. Many girls in the Middle East cannot access education due to lack of resources, expensive tuition and marriage at a young age. Yet many feminist posts call out much smaller problems as examples of the patriarchy victimizing first-world women.
Of course, men and women are often victims – of oppression, of violence, of sexual assault. But not every action by men is victimizing women. The world often perceives feminists as women who always call themselves victims, but it is time for this view to end. It is time for women to stand up and refuse to be victims. Not to claim to be oppressed when there is physical suffering and injustice happening. Not when some women still do not have equal legal rights. This is feminism.
As physicist Rosalyn Yalow said, “if women are to start moving towards that goal [equality], we must believe in ourselves or no one else will believe in us; we must match our aspirations with the competence, courage and determination to succeed.” Feminism is hard work; it always has been. But it is work towards an invaluable goal.
Feminist or not, everyone can agree that men and women should have equal rights. But misconceptions and stigma create barriers that divide those sharing the same goal. Is there a problem with advocating for equal rights? No. Is there a problem with feminism? Not in its purest form. Some people have twisted it to something it is not.
The true problem, though, lies in how people perceive it. When people see feminism as negative, they don’t help women actually suffering. And if everyone does not unite on this issue, the world will never achieve justice for the real oppression of women that continues today. The world will only reach equality if everyone takes up the fight, and this will only happen if non-feminists reconsider their preconceptions about feminism and feminists stay true to the movement’s goal. Only then can they achieve what the world wants: equality.