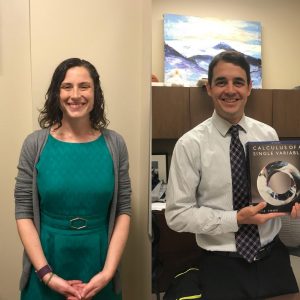 Starting in the 2018-2019 school year, current dean of the Class of 2018 Allison Riley will assume the role of Upper School Dean of Students. Additionally, current Dean of Students Gus Whyte will become the chair of the math department next fall.

Ms. Riley, who has been at Pace since 2006, began serving as a dean in 2010 for the Class of 2014. While Mrs. Riley looks forward to her new position, she has enjoyed her time being a class dean. “Being dean of a class, in general, is a really special relationship that you get to develop with the students,” said Ms. Riley. “Most of the adults at the school don’t get a four-year look at the child, they get a one-year look. What you really get to see is the child who comes in ninth grade grow up, which is amazing.”

However, Ms. Riley feels that she will have a greater opportunity to help develop the school’s culture and values as the Dean of Students. “The Dean of Students has a unique charge, which is really in a lot of ways to be the dean of community and culture,” she said. “I’m excited to put my mark on that.” In preparation for her new position, Ms. Riley has been doing a lot of reading and listening to feedback from others. “[I’m] trying to balance what people hope for the role versus what I want to make the role be,” she said.

Mr. Whyte hopes to continue the excellence in mathematics created by the current department head Charlie Owens, who will retire after this school year.” One thing I’ll say is, I have loved being the Dean of Students,” said Mr. Whyte. “I get to be involved in a lot of different facets of student life, so in some ways I will certainly miss that, but I still think I will remain pretty involved [as head of the math department].”

While he will miss working so closely with other deans, he is excited about his new role. “I think we are in a position to do some exciting things in the math department,” he said. “Things are changing pretty rapidly with how we can teach math, and how we use technology. But at the end of the day, the core skills are really important, and that’s something I think we are doing well and I hope we continue to do so.”

Because Ms. Riley and Mr. Whyte have many years of experience in different areas, Head of Upper School Michael Gannon is sure they are well-suited for their new positions. “[Ms. Riley] has been here [for 12 years], she’s been a dean [for two classes], she’s served on our Honor Council, and so she both knows the student side of it and the administrative side of it,” said Mr. Gannon. “In Mr. Whyte’s case, he’s been here for almost 10 years teaching lots of math classes and he knows all the faculty in that department.” Both are ready to take on these roles because, according to Mr. Gannon, “the key to upper school administrative positions is that you know our community really well.”