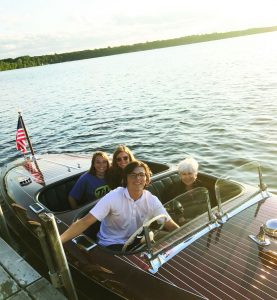 The smell of powdered wigs wafted through Philadelphia as the Second Continental Congress convened. On July 2, 12 of the 13 colonies voted in favor of independence from Great Britain. Two days later Congress adopted the document written by Thomas Jefferson, Benjamin Franklin, John Adams, Roger Sherman and Robert R. Livingston, known as The Declaration of Independence. Nearly a month passed, and a group of 56 delegates, including President of Congress John Hancock, signed the Declaration in Independence Hall.

Independence Day is now observed on July 4th and is one of the country’s most beloved holidays. The 4th of July, also known simply as “The Fourth,” became a federal holiday in 1941 and Americans from coast to coast celebrate.

For senior Morgan Paige, early July means taking a family trip up the east coast to a Massachusetts island just south of Cape Cod. “I normally go to Martha’s Vineyard with my family,” said Paige. She enjoys the warm and relaxing atmosphere of the island and plans to possibly take college friends to the vacation spot next summer. “The BBQ tastes like freedom on the Fourth of July.”

Each summer, senior Joseph Adams ventures to Illinois to visit relatives and celebrate his favorite holiday of the year. “My family roasts a pig in Chicago, and it is so scrumptious,” said Adams. One may think that Americans in the North do not quite celebrate with as much enthusiasm as those in the South, but Adams refutes that notion: “The Fourth of July isn’t different up North. They love it so much.”

Senior Bobby Mills will be working the month of July at Pace’s Riverview Sports Complex for the second consecutive summer. Mills helps manage the fields and facilities and does not mind staying in Atlanta over the weekend of the Fourth. “Luckily, I get the actual Fourth of July off from work so I get to ‘bool’ a bit with my friends,” said Mills. “Independence Day is a day of triumph for me. It makes me take a step back and take in our freedom.”

Junior Emily Pulver and some her friends will trek to northeast Georgia for a couple of days on Lake Burton. “Last summer it made me feel free to wake up on the Fourth in front of the lake with the sun shining,” said Pulver. “This year, I hope to see a bald eagle.”

The Knightly News wishes all of our readers a fun and safe Independence Day. We cannot wait to hear from you next school year.