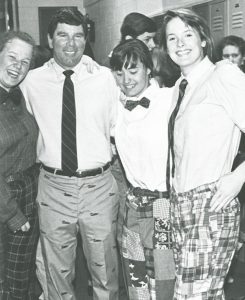 A group of students dress up as Mr. Canfield for Spirit Week during the 1989-90 school year. Photo: Ryan Vihlen

If you ever see a snake or a turtle wandering the halls of the Upper School at Pace Academy, room 314 is where you turn. English teacher Rick Canfield’s exotic classroom pets are one of the many qualities that make him such a fun and memorable teacher. In the 32 years that Mr. Canfield has taught at Pace, he has become “a staple of Pace Academy,” according to English teacher Katie Moss. Mr. Canfield is not only known for his unique classroom, but in the words of English department chair Marsha Durlin, “[Mr. Canfield also] has more funny stories than anybody.”

Before joining the staff in 1986, Mr. Canfield served in the United States Marine Corps and spent one year in Vietnam. Mr. Canfield also taught and coached for three years at the New York Military Academy and spent 10 years at St. Paul’s School for Boys. At Pace, Mr. Canfield has established himself as an impactful teacher and a friend to the students.

Mrs. Durlin reflected on her experiences of ninth grade orientation and the introduction of the English curriculum to ninth graders year after year alongside Mr. Canfield. “I am sort of the serious one while he is kind of the drill sergeant who calls role and purposely messes up the students names while I tell them how to succeed in English at Pace,” said Mrs. Durlin.

One of Mr. Canfield’s most admirable qualities is his ability to connect with students so much so that they feel comfortable visiting him throughout high school just to have conversations with him. Along with Mr. Canfield’s ability to talk to students, he is also known for his classroom decor, which will forever be a memory at Pace. Mr. Canfield has a display of street signs that he has received from students, as well as a traffic light.

Although Mr. Canfield’s retirement will be a huge loss to Pace Academy and its future students, many in the community wish him well. “[Mr. Canfield] has been here for over three decades, and I am happy for him as he begins this next chapter of his life,” said Head of Upper School Michael Gannon.