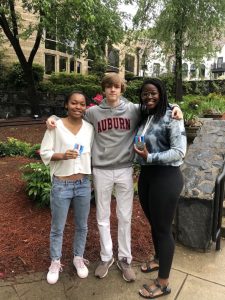 Seven Pace student athletes qualified for the state track and field meet held May 10-12 in Albany, Georgia, and senior Ibum Obu came away with a state championship in shot put and a new school record at 39’11. Obu was ranked No. 1 in AAA in shot put after earning the title of sectional champ at the meet in Bremen on April 21. Also the region champion, Obu had broken four previous school records going into the state meet. Obu also qualified for state in discus.

Sophomore Sam Adams was state runner-up in 800 meters and set a new Pace record at state at 1:57. At sectionals, Adams broke the school record that was set in the early 90’s with his time of 1:59.33 in the 800 meters, according to Coach Jolie Cunningham. Adams was ranked No. 1 in AAA going into the state meet, earning the top spot as sectional champion. Adams was also region champion in 800 meters.

Overall, the girls team finished ninth out of 31 teams and the boys finished 15th out of 35 teams. “We are so proud of this track team,” said Coach Jolie Cunningham after the sectional meet. “It has been a great season of PR’s, records and great leadership. Dedication and hard work simply can’t be beat.”

Junior Justice Jackson, region champion in 200 meters, qualified for state in both 200 and 400 meters. Jackson broke the school record in 200 meters at the region meet with a time of 26:10. “This has been my favorite year of track so far,” said Jackson. “The team has come really far and I’ve loved the bond, the kids and everyone on the team.”