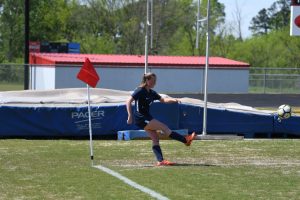 Senior Sarah Ann Ninan has seen it all. As the sole remaining senior on the varsity girls soccer team, Ninan was a part of the team through its state championship appearance, its highs, and regional loss lows. Her optimism and leadership never waivered, setting an example for the girls around her.

This year as a team captain, Ninan made it her goal to cultivate a healthy, competitive community amongst the girls. “At the beginning of the season, we [the captains] had to take a step back to find our chemistry as a team and develop the right mindset to go into each game as aggressively as we could,” said Ninan.

In the past, girls varsity soccer has witnessed its share of success, including a state championship title in 2014 followed by another championship appearance last season. The team, often stacked with Top Hat all-stars, has been nearly unstoppable. However, new club regulations have created obstacles for the team; junior standouts Reagan Bates, Emily Pulver and Hannah White all left the program when forced to choose between playing for their club team or their school.
Because of both the club rule and the graduation of four seniors from last year’s team, the girls varsity soccer program was characterized this year by its new, mostly younger players. Junior captain Kayla Ross noted how the rather young team was “definitely a change” but seemed optimistic about the situation.
Ninan, Ross and junior captain Madeline Janki have helped lead the team from behind. “The biggest challenge of this season has probably been the out of region games,” said Ross. “We keep playing really hard opponents from big schools, so that’s been pretty difficult.”
Despite challenges, the girls stayed positive nonetheless. They approached each game with confidence, tenacity and spirit. “Even if we’re losing, I think it’s important to just look forward to the next good thing that could happen, rather than dwelling on mistakes,” said Ninan.
The girls qualified for playoffs ranked as the third seed in Area 7-AAA behind Lovett and Westminster. The Knights notched a first round playoff win on the road versus Sonoraville High School on April 26 with a score of 4-0.
In the second round of the playoffs on May 1, the team fought an “aggressive and well played game” against Jackson County High School, according to Coach Caitlin Terry. Junior Devan Johnson scored off of Klara Andra-Thomas’ assist 29 seconds into the second half, giving Pace a 1-0 lead. But Jackson County High School prevailed with a final score of 2-1, putting an end to the Knights’ season. The Pace team closed out the season with a record of 8-10-1.